This ranks has the best episode of So You Think You Can Dance so far this season. The all-stars always bring out something more in the competitors and this week’s slate of all-stars was outstanding.

It wasn’t all good. The night started out with the clunker of the night–a group jazz number that was a bit of a mess, courtesy of Tyce Diorio. It was hard to tell who anyone was and the choreography was so spread out it didn’t translate well television. We did get to see Tyce dance as he was filling in for a “slightly injured” Cole. It’s too bad the number didn’t work better since it was a tribute to Gene Kelly, whose 100th birthday is today.

Here’s a look at my top three for the week:

Eliana with all-star Alex contemporary choreographed by Stacey Tookey
A brilliantly controlled and emotional piece. This left me speechless and emotionally spent after the 90 seconds. 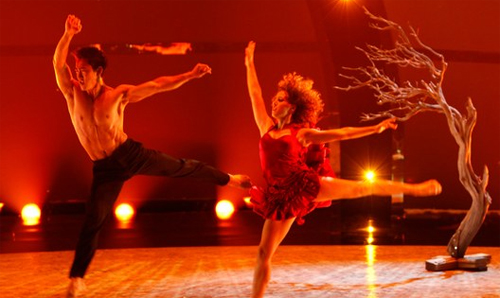 Cyrus with all-star Jaimie contemporary choreographed by Travis Wall
Tremendous. I’ve been a Cyrus fan since the beginning but he found new territory tonight. His characterization during this dance was amazing. While technically not perfect, he performed this complex choreography so well. Travis didn’t  hold back anything and I was excited to see Cyrus really grow as a dancer here. GO CYRUS! 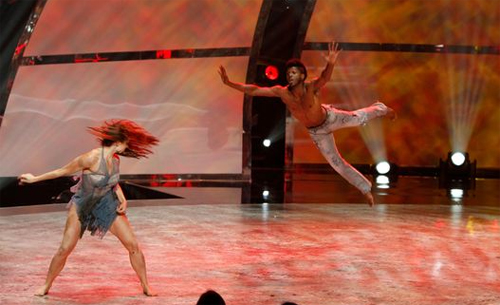 Cole with all-star Anya Cha Cha choreographed by Dmitry Chaplin
Cole kept up with Anya pretty well and it was a great job way outside his style. He had great energy, speed and chemistry with this excellent partner. There were some very snazzy tricks in there too. And, let’s face it, Cole with his shirt open is never, ever, a bad thing. 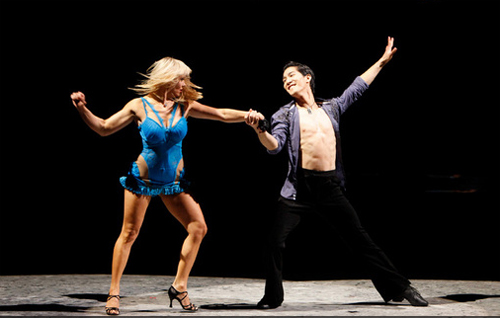 Here’s a look at the rest of the night, in order of performance:

Tiffany with all-star Brandon Disco choreographed by Doriana Sanchez
There was some incredible choreography in this fast dance. Tiffany handled the tricks great, but sometimes she looked lost in the speed of it all. There was a really amazing moment where she was out perpendicular to Brandon and then he threw her over this shoulder. Impressive!

Witney with all-star  Nick Jazz choreographed by Travis Wall
Travis is always outstanding with his choreography and this would’ve been top 3 if he hadn’t topped himself with his other number of the night. Witney and Nick had great musicality and flow here… I’m not sure Witney found sexy, but everything worked nonetheless.

Lindsay with all-star Jakob Broadway choreographed by Spencer Liff
This was not great for her as she seemed not in sync with Jakob at times (although the judges praised her for her syncronization, so maybe I missed something). It was awesome seeing Jakob who is one of my all-time favorite SYTYCDers.

Will with all-star Kathryn Bollywood choreographed by Nakul Dev Mahajan
The Bollywood numbers have felt kind of stale lately, but this one was a  breath of fresh air and energy. Will was awesome with his buoyant personality and great performance. I loved everything about this.

Chehon with all-star Lauren  Hip Hop choreographed by Dave Scott
I did not like this, either the choreography or the performance. It was great to see Chehon be looser and smile more, but overall this failed for me.

George with all-star Allison Jazz choreographed by Tyce Diorio
Allison owned this number, and that was fine by me as it is always great to watch her dance. George was too stiff and needed more characterization here.

Audrey with all-star Twitch Hip Hop choreographed by Dave Scott
So much better than the first hip hop of the night. Audrey was okay here, but Twitch ruled the stage here. She looked uncomfortable outside of her style.

Eliminations
This week there was a bottom two instead of three. For the girls Audrey and Witney were in danger; for the guys Chehon and George. I loved Audrey solo to “(And I am Telling You) I’m Not Going” from Dreamgirls. She danced like she wanted to not go. Chehon did a wonderful ballet-inspired piece that let him be loose and smile, which was great.

While the judges deliberated, LA Dance Project performed in a piece choreopgraphed by this week’s guest judge Benjamin Millepied, also the choreographer of Black Swan. I found this piece unexpectedly dull and uninspired

When it was all done Chehon was safe (yay!) as was Witney.