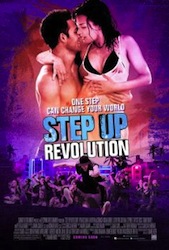 In the lexicon of Step Up movies Step Up Revolution departs from the usual formula. There’s no big competition here, this time it’s about dance as a form of protest and as a way to bring people together for a common cause. Yes, the movie is aiming to deliver a bigger message.

Does it succeed? Maybe.

Does it matter? Definitely not. The movie has some serious moves so the rest of it doesn’t matter.

There’s two primary stories here. The main one is that big bad developer guy (Peter Gallagher) wants to tear down a Miami neighborhood to build a fancy new resort. A group of people who live there, known as The Mob, have been doing flash mobs as a way to win a YouTube competition and they decide to turn their mobs into a form of protest. Developer guy’s daughter (SYTYCD’s Kathryn McCormick) wants to be a dancer and falls in with the Mob and works to stop her father’s development while trying to get into a dance company.

The story is what the story is, and it works acceptably to connect all the major dance sequences together. The acting side of things is pretty good too. Ryan Guzman and Misha Gabriel are solid as the best friends who started The Mob. Stephen tWitch Boss is back as Jason, his character from Step Up 3D. It was nice to see him have even more to do in this movie. It’s McCormick who is the weak link here. She dances beautifully, but her acting isn’t quite there.

Of course, it’s the dances that make this worth while and in this 98 minute movie there’s a significant dance number at least every 10 minutes, and sometimes more often. Choreographers Jamal Sims, Chuck Maldonado, Travis Wall and Christopher Scott contributed some amazing work here.

Scott did one of my favorites sequences, set in an office building lobby and featuring dancers dressed as business people. It was an amazing piece of precision movement, a la some of this fantastic LXD work. Wall tackled the lovers duet, McCormick’s solo scene as well as a very cool flashmob in an upscale restaurant. Sims though has the movie’s most incredible number, in which dancers come to life out of works of art in a gallery.

Like it’s 3D predecessor, this film uses the 3D spectacularly well to give the choreography even more impact. It was well worth the 3D dollars.

Meanwhile, two movies caught my eye during the trailers. It should be no surprise that I want to see these…