Despite an opening group number that was a hot mess (this is what happens, more often than not, when Tyce does something Broadway-esque), So You Think You Can Dance vastly improved over last week. In addition to some wonderful performances from the competitors, Alvin Ailey American Dance Theatre was in the guest spot this week and turned in a strong afro-jazz piece that was great to watch.

In terms of the competition, this week was dominated by Mandy Moore who produced to great dances–one jazz and one contemporary. I love it when a choreographer delivers awesomeness twice in one week and Mandy did that.

Here are my top three for this week:

Cyrus & Eliana Hip Hop choreographed by Tabitha and Napoleon
NappyTabs pull off amazing works a lot, and this is one of their best. Cyrus got to do his animation thing and Eliana got to be a ballerina and it all fused with hip hop. It showcased them both fantastically. 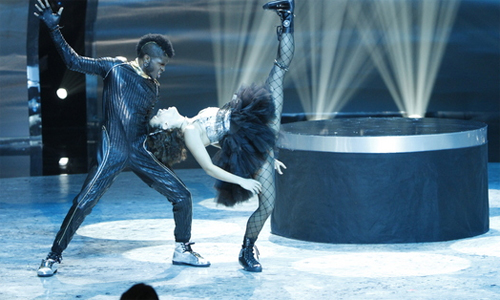 Cole & Lindsay Contemporary choreographed by Mandy Moore
A beautiful and haunting dance. Everything here was perfection. Cole and Lindsay were spot on both technically and emotionally. Kudos to the SYTYCD lighting designers too as they produced an amazing atmosphere for this piece. 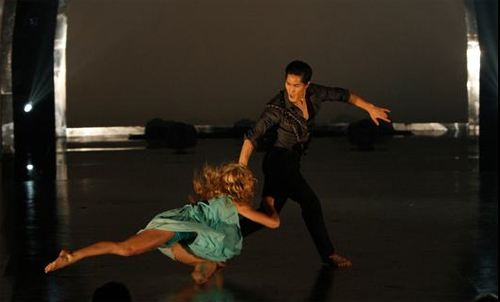 Brandon & Amber Jazz choreographed by Ray Leeper
These two radiated sensualness in a dance that looked like it could have come out of Progy & Bess. Brandon was particularly amazing. I forgot he was a stepper who was way outside his genre. Amber was her usual amazing self. She is my favorite girl right now. 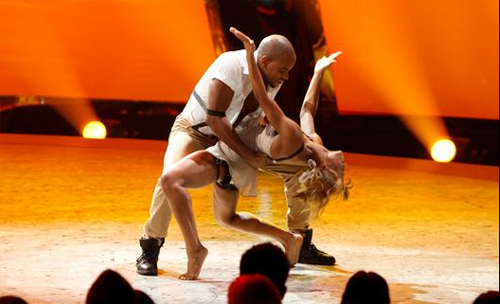 Here’s a look at the rest of the show, in order of performance.

George & Tiffany Hip Hop choreographed by Tabitha and Napoleon
This was less effective than the other NappyTabs number for the evening. It was cute, but these two weren’t always in sync or in character.

Dareian & Janelle Cha cha choreographed by Pasha Kovalev
It was great to see Pasha as choreographer. Dareian and Janelle were great. Too bad the whole thing was marred because it used that awful “Call Me Maybe” song.

Will & Amelia Jazz choreographed by Mandy Moore
This was in the top 3 until Cyrus & Eliana took the stage. I’m a major fan of Will and each week he gets better. He tackled the quirky choreography beautifully. Amelia played too much to the audience and I didn’t care for that. While Will had a character he was playing, I felt Amelia was mugging too much.

Matthew & Audrey Salsa choreographed by Liz Lira
Such an unfortunate dance that left too of my favorites in a bad place. It was such a slow salsa. I’m not sure if it was supposed to be that way, or if it just happened. Matthew and Audrey didn’t perform this well. I think they were uncomfortable in the genre and it showed. Every time Matthew smiled it looked like he was pleading for help. I’m not sure they can survive this.

Chehon & Whitney Contemporary choreographed by Stacey Tookey
Something was off here for me. Chehon and Whitney had good characters. They performed the choreography well. It seemed like there was no connectivity between the individual moves though. I wanted so badly to like this, and I sorta did…but not as much as I should have.

Eliminations
Bottom three for the girls were Amber, Lindsay and Eliana. None of these deserved to be here and it was sad to see one leave. Amber was the one that ended up eliminated, which was so unfortunate on the night of her best performance yet. There were no good choices in this bottom three, whoever had to go home was going to be missed by me. I’d much rather have seen Amelia or Audrey down here.

Bottom three for the guys were George, Brandon and Dareian. Brandon, also on the night of his best to date, was eliminated. Here I would’ve rather have seen George go. He’s good, but he’s not blowing me away.

SYTYCD is on break two weeks now for the Olympics. I don’t like that, but I get it and hopefully the dancers will take the break and come back ready to dance for their own glory.