There’s usually one So You Think You Can Dance episode each season that’s not quite what it should be. The dances lack some spark, the dancers are a little off their game. It usually happens around week six or seven. Strangely it seemed to happen last night in only week two. Much of the choreography seemed uninspired and some of the dancers didn’t seem engaged either.

Not everything was bad.  Sonya Tayeh had an amazing evening. She choreographed two fantastic numbers, one contemporary and one a quirky jazz number. Both were classic Sonya and were a great boost to the evening. There was also a guest performance featuring the cast of the upcoming Step Up: Revolution, featuring former SYTYCD‘era Twitch, Phillip and Kathryn. It was incredible and I can’t wait to see the movie, which comes out next week.

Now, on to this week’s top three, in order of preference this week:

Will & Amelia Contemporary choreographed by Sonya Tayeh
Loved it! Especially awesome was Will. He had such a good character going on while he danced a technically perfect piece. I like him more and more. This dance makes the top spot even though I didn’t buy into Amelia’s character one bit. At least she did the choreography well. 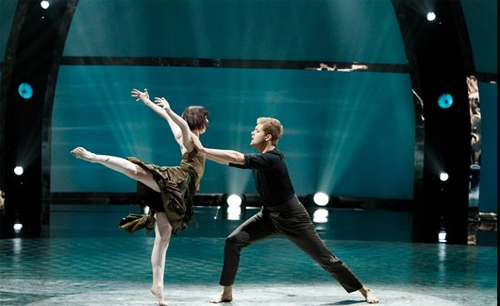 Nick & Amber Argentine Tango choreographed by Miriam Larici and Leonardo Barrionuevo
Amber was so perfect here. Her leg work was precise and awesome. She had fierce character. She made Nick virtually disappear in the dance as she worked some Tango magic. Nick, for the record, wasn’t bad at all… he did everything he was supposed to and made her the showcase. 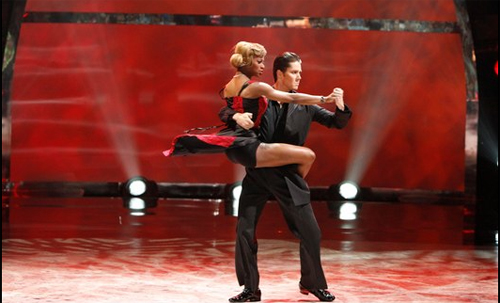 George & Tiffany Fox Trot choreographed by Melanie LaPatin and Tony Meredith
Such a delight. Their musicality was spot on and their characters were light and bubbly. It was an MGM musical going across the stage. 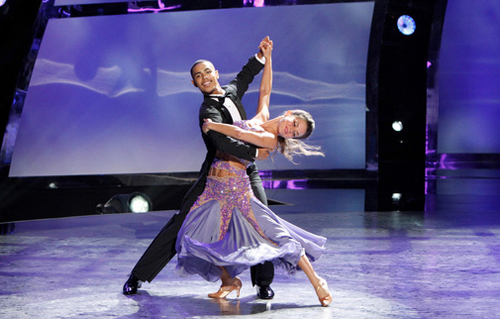 Here’s some quick commentary on the rest of the dances, in the order they were performed:

Cole & Lindsay Hip Hop choreographed by Christopher Scott
This was a fun number, but Cole was trapped in the chair too much and, frankly, and on too many clothes. Lindsay also needed to be sexier given the character she was assigned to play.

Matthew & Audrey Jazz choreographed by Sonya Tayeh
I love Sonya’s quirky jazz and it was great here. The reason this didn’t make top three is because, while Matthew and Audrey did a good job with it, I couldn’t help by wonder what Mark and Ellenore could’ve done with it since they practice the art of Sonya oh so well.

Dareian & Janelle Lyrical Hip Hop choreographed by Christopher Scott
I couldn’t totally buy into this. First off this was a weak piece from Christopher Scott. I expect a lot more from him (and I was glad Nigel called him out on this). The dancers didn’t seem that into it either.

Brandon & Janaya Broadway choreographed by Sean Cheesman
Who decided Sean could do Broadway? I like the last 30 seconds with some of the flashy tricks. I’m not clear what the judges found to like in it.

Cyrus & Eliana Jive choreographed by Melanie LaPatin and Tony Meredith
Well they tried. It lacked speed and flow, but made up for it by being completely entertaining. I continue to like these two.

Daniel & Alexa  Contemporary choreographed by Dee Caspary
I would’ve liked this better without the bathtub. It really tied these two down instead of letting them flow with the choreography more. These two lacked sensuality too, which was a bummer.

Chehon & Whitney Bollywood choreographed by Nakul Dev Mahajan
Such a disappointment. Nakul numbers are starting to feel all the same. At least Chehon and Whitney did it well.

Eliminations
They made it very clear they were saving someone, not sending people home. It put a polite spin on the proceedings. It sounds like they have the option to see a re-dance too if they want. We didn’t see that play out so it’s not clear if they’d redance one of the numbers we’d seen or if there’d be a solo. I guess we’ll find out about that in the weeks to come.

Bottom three for the girls this week were Alexa, Janaya, Whitney. For the guys the bottom three were Nick, Daniel, Chehon. I’m pleased that they saved Whitney and Chehon. Alexa and Daniel have been dull for two weeks now. Nick was okay, but wasn’t standing out and Janaya also was not holding my attention.