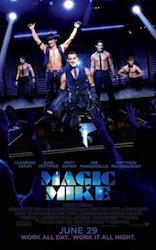 Does the plot of Magic Mike even matter when a considerable portion of the film features Channing Tatum, Alex Pettyfer, Joe Manganiello, Matt Bomer, Adam Rodriguez and Matthew McConaughey in various states of undress?

That the film does deliver a pretty solid story is icing on the cake. I shouldn’t have doubted that a Steven Soderbergh movie would include a plot. I admit that from the marketing campaign that I was expected a fun movie and while there is a good bit of fun, there is some dark, dramatic turns that come up as well. Tatum’s character is hoping to build a future in the stripping game by getting an equity stake in the club, though as you can imagine that doesn’t go as planned. He also takes a new guy under his wing and that doesn’t completely go right either. Tatum definitely owns this movie from the start. In the beginning you like him because he’s cocky and sure, but as his plan falls apart you like him because you realize he’s learning from his mistakes and still wanting to make a future rather than take the easy way out.

Kudos to the stripping scenes. They are a ton of fun and they certainly got super hot guys on that stage. Strangely Manganiello, Bomer, and Rodriguez don’t have bigger roles other than being hot dancers. Kudos to those actors for playing such small roles. McConaughey was a bit of a revelation. I can’t think of a movie that I’ve enjoyed him in since Contact, but here he plays the strip club owner to perfection, going from friend to nasty over the course of the film.

Also, can someone give a musical to Tatum? I haven’t seen him dance since he stopped being in the <em>Step Up</em> movies, but the guy can still move and he’s mesmerizing while he’s doing it. More please!

In a June of disappointment–where Prometheus was such a disappointment that we backed away from seeing Abraham Lincoln Vampire Hunter and Snow White and the Huntsman because it seemed like we’d be bummed again–thankfully Magic Mike delivered something that met expectations.