Chelsea Challenge 2012 played out this weekend and the Pittsburgh Tigers won the Silver Medal in the Developmental Division. It was a come-from-behind weekend as the Tigers started out slow in round-robin play but stormed back Sunday morning to get into the medal round. It was a great weekend that mixed classic New York-based Tigers with the newly formed Pittsburgh Tigers. 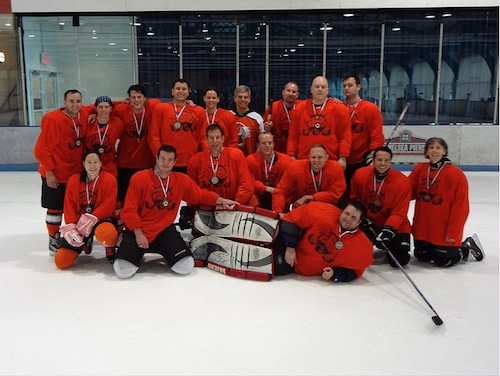 The team was created by former NYC Tigers Mike and Adam who created a Pittsburgh Tigers as the first team in a newly formed Pittsburgh Gay Hockey Association. As Chelsea Challenge time grew near, Mike and Adam reached out to some NYC Tigers and put a team together that was a great mix of old and new. It was an honor to be asked and an even bigger honor to take to the ice with some great teammates I’ve played a lot with over the years as well as meeting some brand new Tigers.

We kicked off Friday night in a losing match against the Louisville Llamas. It was a 4-3 game, but it only got us 2 tournament points since we did win the third period. Saturday we played twice. At 9:10am we played the Springfield Scorpions and lost 2-0. We only got a single tournament point this time out since we tied one period 0-0. Next at 4:40pm we played the Bismark Bears. We gelled in this game, winning 6-3 and getting six tournament points having only lost a single period. Even with that last minute addition of points, we were still in last plays and rolled into Sunday morning as the fourth seed playing the number one Scorpions. Here we won 3-1 and advanced to the medal round where we once again met up with our first game opponent, the Llamas. This time out it was a 4-1 loss against them, but we still came out with some sparkly silver bling.

I hadn’t played at all since the Memorial Day fund raising scrimmage, and I think it showed a little bit Friday night. I was on ice for two of the four goals against, and one of those I should’ve seen coming and been able to stop. Granted, we were all getting used to our positions and our line mates, but I still wanted to play at my best for Mike, Adam and my teammates. Saturday morning was better, we were playing more cohesive. Granted we didn’t score a goal, but we held down the opposing number of goals and we were making solid plays. I was very annoyed I let Jonathan, the Scorpions captain get a goal in on me. Saturday afternoon was a great game. As a team, we completely clicked. Yes, the opposition got three goals, but we racked up six. It was an excellent end to the day of playing and watching games…and as a lead in to the tournament banquet.

Sunday was a mixed bag for me. Something made my stomach unhappy. I was awake way too much Saturday night  into Sunday morning. When I got out of bed at 6:30 for the 8:00 game, I was tired and feeling crappy… but there was this game that had to be won. I managed to play, and play pretty damn well if I do say so myself. The single goal scored by the Scorpions in the semifinals didn’t happen while I was on the ice (which I was very thankful for… the first game I wasn’t out for a goal against). I also helped kill at 5-3 situation we got ourselves into, which I stayed on the ice about three minutes for.

The worst part of Sunday was the roughly two and half hours between the semis and the finals. I took off the top half the gear, put on a clean t-shirt and hoodie and laid down at the top of the bleachers for about 90 minutes before the cold soaked in through the bench. After that, with about 45 minutes until it was time to prep for the next game, I scavenged a little bit of food to put fuel in the tank and hung out with some of my teammates and other players. When it was time to gear up, I plugged my iPod in my ears, turned up some shiny, happy Glee songs and got myself into the best mental space possible given how I felt.

As a team we went out there and gave it our best shot. Yes, we lost 4-1, but I was proud of our effort. We’d come back from being the last place team to walking away with a silver medal. I was also proud of myself for finding what was needed to put out a solid game despite wanting to simply crawl into bed and pull the covers over my head. (Thankfully, by Sunday night I was feeling better, got a good night’s sleep and felt pretty normal on Monday morning).

Some highlights of the weekend:

It was an excellent weekend, even with the Sunday sickness.

Meanwhile, Mike, Adam and the Pittsburgh Tigers open their second season on home ice tonight and I say to them a mighty “GO TIGERS!”