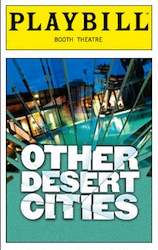 You know you’re in for a great performance when the cast of the play is headlined by Stockard Channing, Stacy Keach and Judith Light. Add to that the fact that the production is up for five Tony Awards, including Best Play, Best Actress for Channing and Best Featured Actress for Light. We’d been wanting to see Other Desert Cities for months and finally took it in yesterday afternoon because we found out the show’s run was ending next weekend.

I’m so glad we made it before closing day because this is a powerful and very timely piece of work.

Playwright Jon Robin Baitz tells the story of a Hollywood-raised family. Mom and dad (Channing and Keach) are staunchly right wing and have worked closely with the Republican party over the years. Their children, however, are very liberal. Daughter Brooke (played  by Elizabeth Marvel) has recently gotten out of rehab and is getting ready to publish her long-awaited second book. Their son Trip works on a TV court room show. There other member of the household is mom’s sister, Silda, who fell off the sobriety wagon and is living with her sister to get back on her feet.

The story takes place at Christmas 2004 and Brooke has brought her new book with her for her family to read. It’s not a book they want to read, however, as it deals with their oldest son, Henry, who committed suicide 30 years earlier after getting mixed up with some radicals who blew up an army recruiting station. 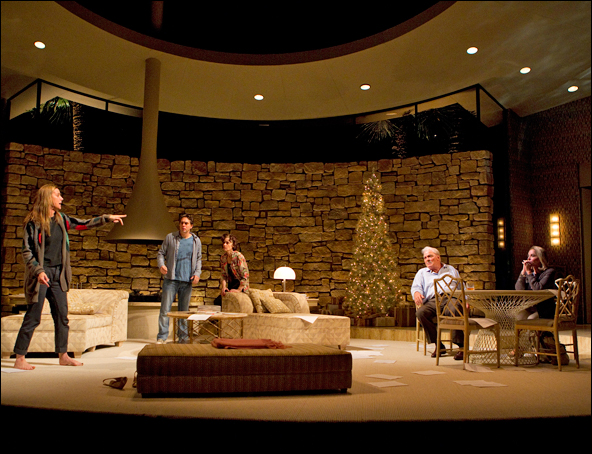 The Christmas gathering was already strained before Brooke ever pulled the book out. The family definitely loves each other, but their politics pull on them at every turn. Once the contents of the book are revealed the family strains at the seams. There are things Brooke doesn’t know. There are things Silda, who helped fill in some gaps, doesn’t know. Baitz has crafted a story that shines a bright light on how far a family will go to protect and help its members. To his credit, the story has an excellent cadence between comedy as the family spars with each other to some devastatingly difficult revelations.

Channing and Light are very deserving of their Tony nominations. Channing is a powerhouse as a matriarch who’s will do anything to protect what she believes in. Light’s performance is quieter than Channing’s, but she delivers some of the play’s most profound moments. She’s also amazing to watch even when she’s not the focus of a moment because you can see her actively considering what’s being said around her. It’s a master class in being in the moment of a scene.