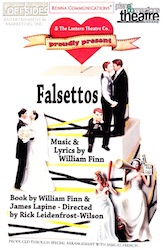 I’ve long loved the show Falsettos, even though I’ve never seen it. I discovered it on the Tony Awards in 1992. It was nominated for a number of awards (including Best Musical) and won Best Book for William Finn and James Lapine as well as Best Score for William Finn. The cast performed on the Tonys and I fell in loved with the quirky characters at the center of the story, which takes place in 1979 and 1981.

There’s Marvin, who’s left his wife and son to be with another man, Whizzer. That leaves Trina looking for love and Jason looking for a father figure since he’s not sure what to make of his father kissing a man. Trina finds her man in psychiatrist Mendel. There are also two plucky lesbians living next door-Dr. Charlotte and Cordelia, a caterer.

Here’s a clip that explains the whole thing:

Last night I finally got to see a production of the show. It’s currently running as part of the Planet Connection Theatre Festivity (you can see more about the remaining shows Falsettos has here–as I write this there are only two left next week). Quiet timely to see it too since this is the 20th anniversary year of its Broadway debut.

And I’m so very happy to have seen it! The show is tremendous. It’s heartwarming, funny, devastating. Looking at it from the point of view of today, it’s also very Modern Family with the different takes on what makes up a family–both small and large. The book and score have aged well over the years, even though the it all takes place in a time that’s now 30 years gone by.

The night had an extra benefit too because I know people involved in the show. I met Rick and Chris Leidenfrost-Wilson a few years ago because of Hockey: The Musical!. For Falsettos, Rick was the director, musical director and piano player, and Chris played Whizzer and also did choreography. It was great to see these two at work!

I can’t recommend this highly enough so if you can get to the last two performances… do it!