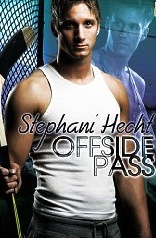 I am behind in writing about the books I’m reading and today and tomorrow I’m going to catch up.

First is Offside Pass by Stephani Hecht, which is part of her multi-book Blue Line Hockey series.

The book opens with the Canton Brothers arriving at their new hockey home with the minor league Battle Creek Hawks, a team that hasn’t won a game in three years. The brothers are at the end of the line after being thrown out of the NHL and several other teams. How did this once promising trio end up in Battle Creek? Journalist Saul Davis is eager to find out, especially after he watches the  brothers get thrown out of their first Battle Creek game for fighting between themselves. Saul’s also attracted to Devon, the eldest of the trio. Saul eventually ends up with a disturbing story that he may jeopardize his career by not printing.

Hecht builds a great story here, with its foundation in family and the lengths that family will go to protect each other. Devon, Chad and Trey have been through a lot, but at the end they are very close while at the same time having fierce tempers. It was fun to watch these three go through their various states of loving and hating each other. At the same time, it was touching as Devon worked through his feelings for Saul. Devon knows he needs to keep the report at bay, but at the same time he feels the same attraction that Saul feels for him.

I enjoyed the different plots in play, since the book covers a couple of my favorite topics: hockey and journalism. There were a couple good hockey scenes, some good scenes of Saul working to get his story together and a excellent tension between Saul and Devon as they try to figure out if their going to fall for each other or not.

Hecht created good characters here and I’m going to pick up some other books in the Blue Line Hockey series so I can read more about them.