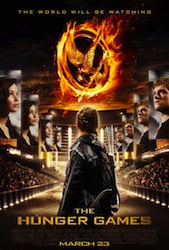 Since I finished reading The Hunger Games late last year I’ve been excited to see the movie and see how they were going to pull off such a large scale story that is told through the eyes of a single character.

I like the results of the film that opened this past weekend. The overall way they turned the novel into a film worked well. I think the only thing that would’ve made it better is if they’d had more time to lay the story out, such as a six hour cable miniseries. However, to stuff the story in to around 140 minutes, they did a  pretty good job. In fact, I think people who haven’t read the book won’t feel like anything is missing. I can’t fault the filmmakers for their choices, they make complete sense in terms of getting the narrative to screen.

I thought the casting was spot-on. Jennifer Lawrence and Josh Hutcherson were very good as Katniss and Peeta. Liam Hemsworth had the perfect brood as Gale. Woody Harrelson as Haymitch was good, though I would’ve liked to see more of him and the back and forth between drunk and sober. Lenny Kravitz was delightful as Cinna. Donald Sutherland was at his evil best as President Snow. Like Harrelson, I wish we’d have seen more of Elizabeth Banks’ Effie. Except for Katniss and Peeta, a lot of the supporting characters were glossed over in this film and hopefully well see them fleshed out in the next two films because it’s clear there’s some good stuff going on there.

Director Gary Ross did a great job putting the film together. From the get-go when we see Katniss in District 12, you immediately feel the oppression. The reaping scene, which runs with no-music and jerky camera movements works so ideally to ratchet up the tension and let you feel the heartbreak at what’s going on as two teens are shipped off to likely die. I’m often not a fan of jerky camera work, but here it’s used well and helps the movie pack a punch with a you-are-there sort of feel. I also like how the movie was opened up since I think it would’ve been difficult to keep everything to Katniss’ point of view. The scenes in the game control center, in the Capitol, in District 12… and in a key scene in District 11… were great.

I hope Ross continues with the series and directs Catching Fire, which is due for Thanksgiving 2013.

Meanwhile, just a moment on some of the trailers that ran: The Amazing Spider-Man looks fantastic and Andrew Garfield is hot! … I don’t think there is anything that can scare me off a movie more than seeing “From Best Selling Author Stephenie Meyer.” I’m not talking about Breaking Dawn Part 2 (which we saw a trailer for and I’m still not seeing) but The Hose which is coming in March 2013. If her name is on it, I’m not in theater. … The Avengers looks like it’s going to be a lot of fun. Can’t wait for that!