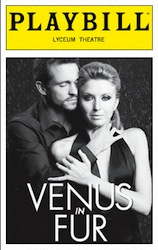 We’re headed into a stretch of trying to see a number of shows as there are a number of things opening as the push for the Tony Awards begins. We kicked off this stretch with the widely acclaimed Venus In Fur. The play, by David Ives, is in its third incarnation after starting off-Broadway in 2010. The non-profit Manhattan Theatre Club ran it in its Broadway space late last year and currently it’s having a commercial Broadway run at the Lyceum.

Venus In Fur tells the story of Thomas, a writer/director who is auditioning actors for the premiere of his adaptation of Leopold Von Sacher-Masoch’s classic erotic novel Venus in Fur. The play opens at the end of a long day of auditions as an actress comes in dripping wet and late. On the surface Vonda appears to be a ditzy actress who couldn’t possibly be what Thomas is looking for to portray Venus‘ Vonda. Over the course of the following 100 or so minutes Vonda shows exactly what she’s capable of and Thomas reveals layers of himself that he may not have been aware that he had.

Nina Arianda is quite the discovery in this role. During the show’s off-Broadway run she won the Outer Critics Circle Award and was nominated for the Drama Desk and Drama League. Last year she also received a Tony nomination for her Broadway debut in Born Yesterday. She’s no doubt going to pick up another Tony nomination for her turn as Vonda on Broadway. It’s amazing watching her move between playing actress Vonda and the Venus character as well as later turning the tables on Thomas. Hugh Dancy, who has been with the show since it’s MTC run last year, is great as Thomas. He doesn’t leap through as many hoops as Arianda does, but he’s got a journey of his own as he goes from harried director to being dominated.

Ives has crafted a show that is funny, at times darkly so, sexy, provocative, tense, dramatic and powerful–often all at the same time. It’s a deft blend of characters that is captivating as layer after layer is revealed.

Venus in Fur continues through June 17 and shouldn’t be missed.