Carrie The Musical is Reborn 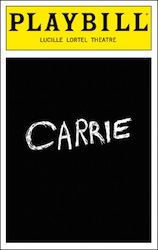 Director Stafford Armia along with the original team of book writer Lawrence Cohen, composer Michael Gore and lyricist Dean Pitchford have transformed Carrie, the cult favorite musical that has the designation as one of the biggest flops in Broadway history, into a powerful, serious musical that should be able to shake off its less than stellar past.

This revised version of Carrie began previews two weeks ago (on January 31), officially opens March 1 and continues playing through at least March 25 at MCC Theatre.

Carrie is set in the present, with the story rooted in the issues of today’s bullying epidemic. What the kids bully Carrie don’t realize is they’re playing with fire because her supernatural powers are just coming to light. Where the show was once a bit schizophrenic between solid, emotional scenes between Carrie and her religious zealot mother and the mostly ridiculous scenes with the high school kids, there’s a much better balance now. It’s not perfect, but its a considerable improvement.

By my count, they jettisoned around half the score. In the first act one two of the students songs were cut and three new ones brought in. The second act is a near total rewrite with only four songs staying in place. Even with the material that made the cut, there are  lyric adjustments and much improved orchestrations (gone are the very 80s sounding arrangements). Also gone is the notorious opening of act two where Chris and Billy have an extended song and dance moment when they go out and get the pig’s blood (go kill the pig, kill the pig, kill kill, kill the pig).

The new material set up the angst and difficult of high school, give Tommy and Sue more business to set them up as good guys amongst the chaos (Sue’s also a bit of a narrator here like she is in the novel). The show is still at its best (as it was in ’88) with Carrie and her mother. The push and pull of Carrie trying to get some amount of freedom while her mom seeks to protect her and keep her on the religious path is powerful. In the hands of Molly Ranson and Marin Mazzie, these characters soar. They often gave me chills and Mazzie moved me tears with her rendition of “When There’s No One.” 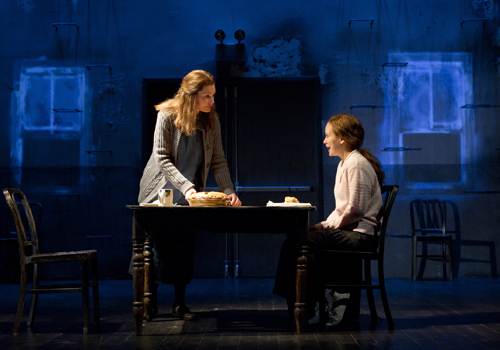 Carrie, thankfully, sticks to realism (albeit a minimal realism) in its design. Where the ’88 version was stark, this one is subdued and seems grounded in reality. The high schoolers dress in regular clothes for school, gym and prom. They don’t overdo the special effects when it’s time for telekensis. The prom doesn’t look like something out of Solid Gold, it now seems like a dance with basic decor happening in a gym. The destruction at the end is cleverly done with lighting, strobes, choreography and some inspired direction and projections. I was impressed. 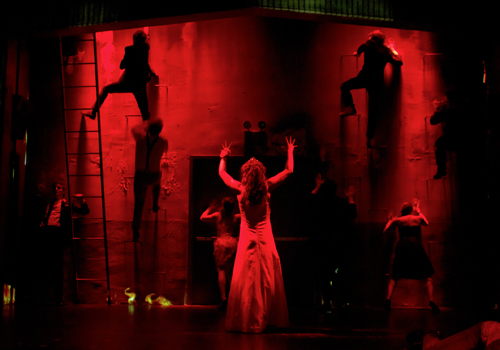 It may sound like I don’t like the original Broadway version. I do. As long time readers of the blog know, I’ve spent some time acquiring what I could from the show. I’ve got a copy of a video of the production and I’ve got recordings of both the Broadway and London versions. I’ve long maintained that the Carrie/mom material was really good and the high school parts were laughable…entertaining, but laughable. Now that the creators have revised their work, and have moved the show more towards their original vision, it’s now not only an entertaining show it’s got some power and depth.

The show still has some issues with balance as the mother/daughter scenes do still carry the most weight. As Will and I were talking over dinner, the source material itself just doesn’t seem ideal for a stage production. Somethings just don’t completely work–just look at how many times Chess has been reworked over the years. This production, however, can hold its head high. It’s light years better than what came before and this team deserves major kudos for the transformation.

I’d love to see the show continue past it’s current March 25 end date. It’s going to be interesting to see what the critics have to say after opening night, especially any contrast the original critics might make.

My biggest request–RECORD THE SCORE! I’d love something better than my sad bootlegged CDs to listen to and Mazzie, Ranson and company deserve to be preserved.