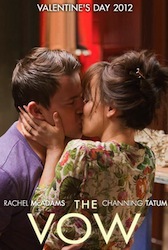 I was surprised to learn that The Vow wasn’t a Nicholas Sparks adaptation since it has two actors who’ve both been in his movies and it has a lot of heartbreak too. Turns out this is based on a true story that just has a lot of Sparks overtones. I admit I’m a sucker for Sparks movies, and this one had everything I needed for a satisfying afternoon at the movies.

Leo and Paige meet, date and get married. Four years after they meet they are involved in a horrific car accident. Leo recovers with no issues. Paige, however, has a huge gap in her memory and can’t remember anything about Leo. With what she lasts remembers, she’s in law school rather than being an artist… and she’s engaged to another man. After the power of their initial romance, it’s devastating to see it all far apart. Leo puts up a great fight for the love of his life.

Channing Tatum and Rachel McAdams, having been in Sparks movies, know exactly how to play these parts and I was right there with them. I laughed, I cried, I was left all emotionally squishy in the end. Most interesting about the end, it didn’t completely go where I thought it would, which I appreciated.

Appropriately, one of the trailers before The Vow was for The Lucky One, which is the new Nicholas Sparks-based film. It’s due out April 20 and stars a scruffy looking Zac Efron. I’m sure I’ll be in the theater to see that one.