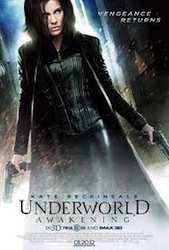 Since I’ve seen the other Underworld movies, I was predisposed to want to see this latest installment in the ongoing war between vampires and lycans. Awakening was a kick-ass entry in the series and the addition of 3D worked well for it.

This movie jumps forward from film number two (film three was a prequel for the series). We see a brief bit of a war that went down between the humans and the non-humans. This would have made a good movie on its own, but it’s only the prologue to the main story. Jumping forward 12 years, we catch up with Selene defrosting from a long sleep. She goes hunting for her hybrid lover Michael, but discovers a young girl instead. From there we find out what the surviving vampires and werewolves are up to and who exactly the girl is and why science is so interested in her. 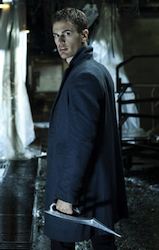 Kate Beckinsale continues to rock as Selene. She wasn’t in the third move, but she was back with a vengeance this time out. We also got to meet extremely hot surviving vampire David, played by Theo James. If there’s another film, I hope he gets to play a part. And, yes, there’s enough left unsaid at the end of the film for at least another movie or two.

I was quite impressed with the 3D. This movie was 90% or more shot at night, yet the 3D was sharp. I’m used to darker films, like Tron Legacy, looking murky because you’re looking through dark glasses. The Underworld team took that into account and did some excellent 3D photography. The action sequences looked great, without throwing too much blood on the audience.

Hopefully in 2014 or 2015, Beckinsale will done the tight black costume again and continue the story.