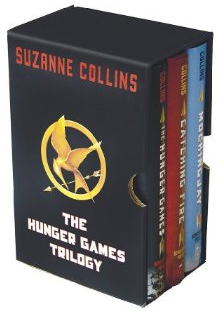 I’m probably one of the few people that has waited this long to read The Hunger Games trilogy by Suzanne Collins. The books, targeted at the YA audience, chronicles a teenaged girl and her friends who live in the remnants of the United States at some point in the future. In this future, one of the ways the government keeps control of the citizens is by forcing two children from each district into the yearly battle to the death known as The Hunger Games.

I’ll say up front that I’m not going to avoid spoilers here, so if you’ve not read the books read on at your own risk.

The first book was full of intensity as we’re introduced to the main trio of characters: Katniss and Peeta, who end up going into the games, and Gale, Katniss’ long time friend. While the introduction is a bit slow, once we’re at the ceremony to pick District 12’s “tributes” to the games the book moves at a fast pace with most of the action taking place in the game arena. The games are clearly a manipulative game by the capitol government. As Katniss and Peeta are cast in the role of lovers, they end up winning over the home viewing audience. When the government reneges on its declaration that two people from the same district can be winners, Katniss and Peeta are on the verge of suicide rather than kill each other when that decision is reversed.

This leads to the goings on in Catching Fire where it’s revealed that the suicide pact was seen as rally against the government. In particular Katniss has become the face of rebellion and in an effort to quell that, the government announces that the next games, which happens to be the 75th, will feature a return to the games by the living winners. Yup, Katniss and Peeta are back in the arena with others (young and old) to play again. The arena in this book is more interesting and deadly than in the first book and the stakes are much higher. Most of the participants seem to realize this is a ploy by the government to indicate that they can control everyone, even past winners of the Games. This time out though the games don’t end, Katniss is broken out of the arena along with some others and a true rebellion is revealed.

Book three, Mockingjay, has rebellion going full tilt. Peeta is held by the government and brainwashed. District 12 has been laid waste. District 13 has revealed itself. Katniss is fighting becoming the Mockingjay and the public face of the rebellion. There’s a lot of fighting, an eventual rescue of Peeta, who struggles to figure what’s real and what’s not. The love triangle  between Gale, Katniss and Peeta plays itself out too. As a finale, there’s an eventual showdown at the capitol that has some twists I didn’t see coming.

Overall I liked the series, especially the first two books. Collins created  compelling characters thrust into situations that teenagers shouldn’t have to deal with. The third book felt rushed though and it had a tone that reminded me of Starship Troopers, with the use of propaganda films and some staged rebellion scenes. It gave the story more of a fake feel than the other two books where everything felt painfully real. I did like how the trilogy wrapped up with a brief epilogue 20 years in the future. It put a good cap on things and left them neither too rosy nor too dreary. I’d call it a good dose of reality.

Now that I’ve read the books, I’m looking forward to the first movie, due out in March. The trailers look great so hopefully the movies capture the books well.