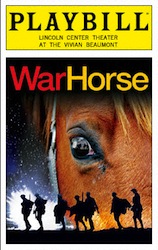 When The Lion King debuted in the fall of 1997, Julie Taymor revolutionized Broadway with the use of puppetry in the show. Last spring puppetry moved to a new level on the New York stage with War Horse. In the show, which came to the U.S. from London, won 5 Tony Awards, including Best Play along with a special Tony for the Handspring Puppet Company for their work on the horses and other puppets used in the show.

The story is based on a children’s book by Michael Morpurgo and looks at the relationship between Albert, a young farm boy living in the English countryside, and his horse, Joey. His father buys the horse from an auction, using the mortgage money to acquire the horse to spite his brother. Albert takes care of Joey and ultimately wins the right to keep him after his father makes a bet that Joey, who is a thoroughbred horse, can plow the fields. His father, however, seeing the chance to make money, sells Joey to the English army, which is getting ready to go into World War I.

The first act follows Albert working with a foal, and then an adult Joey. When Joey goes to war we meet another horse, Topthorn, who goes with Joey into battle. At the top of the second act, Albert, who is only 16, lies about his age to enlist and go find Joey. The act goes back and forth between Joey and Albert, detailing what each are enduring as the war drags on.

The second act is brutal as the horrors of war are played out. Soldiers and horses are maimed and killed. The addition of machine guns, barbed wire and, eventually, the tank, are particularly hard to watch. There’s also a lot of humanity on display, in particular with a German solider and a young French girl who bond over the beautiful horses. 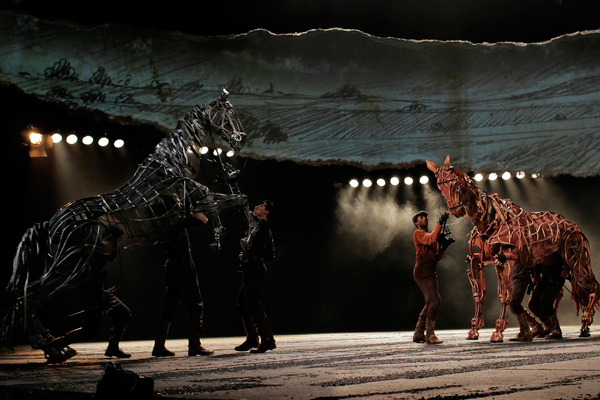 The core of the show centers around Joey and Albert. Seth Numrich is outstanding as Albert as he goes from enthusiastic boy to a young man who keeps his spirit alive by believing that he will find his horse. Alyssa Bresnahan was great as Albert’s mom, who does everything she can to bring her son up right despite his alcoholic father. War Horse also makes use of songs as narrative with Kate Pfaffl and Liam Robinson in the roles of Song Woman and Song Man. Their tunes punctuate the action, adding even more emotional impact.

The puppeteers are the other stars of this show. Three handlers each work Joey (both as a foal and adult) and three handle Topthorn as well. They make the horses come to life in great detail, from the spirited gallops across the stage to subtle tilts of the head, the way the horse breath and a flick of the tail. It is simply astounding.

War Horse ranks among the best, most satisfying evenings I’ve spent in the theater.

Steven Spielberg’s movie adaptation of War Horse opens this weekend. I’m not sure how the film can compare to seeing the story unfold live on a stage with the magnificent performances from the puppet horses.