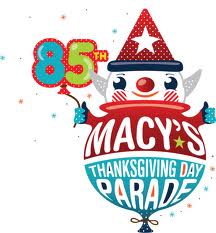 I’ll be up and out of the house before dawn on Thanksgiving morning so I can get ready to escort Ronald McDonald down the route of the 85th Macy’s Thanksgiving Day Parade.

How did I end up escorting a balloon? The Flying Goats had the highest per-person average fund raising for Braking the Cycle and the award for that was to escort a balloon. I’ve been excited about this since it was announced in September. I’ve loved the parade for as long as I can remember.

Where I tend to shun tourists things in NYC, I’ve been out on the parade route to watch 5 or 6 times since moving here in December 1998.

This year, I get to participate. I’m excited! I’m nervous! I can’t wait! 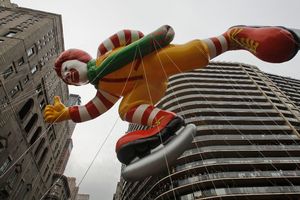 The parade kicks off from Central Park West at 9am ET. I’ll be at the New Yorker Hotel by 6:30am to get costumed to escort Ronald McDonald down the 2 1/2 mile route. From the Hotel, which is on 8th Avenue between 34th and 35th Street, it’ll be a bus uptown to 81st Street where the balloon waits. From there, me and the rest of the Flying Goats–and anyone else who is involved with the McDonalds contingent–will await our time to enter the parade.

Ending up with this balloon strikes me as humorous and approrpaite. While working at Promotions.com, I worked on a couple of McDonalds projects. Plus, Ronald’s on skates…so there’s a hockey-esque connection here too.

I’ve been doing my best to be ready to handle the balloon. I got a DVD that shows how to handle it, plus there’s a multi-page PDF that I got with my credentials that I’ve been looking over. It looks like it should be pretty easy. The weather looks like it’s going to mostly cooperate. Looks like it will be in the high 30s with partly cloudy skies as the parade starts. The wind could be interesting. Currently the forecast is for NW winds at around 14mph. We’ll see how the weather morphs as Thanksgiving Day draws closer.

It doesn’t sound like I’m going to be able to check-in much from the parade route as cell phone use is pretty restricted, but I’ll snap what pics I can and I’ll definitely blog about it all once it’s over.