The Book of Daniel by Z.A. Maxfield 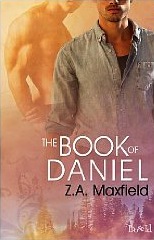 Z.A. Maxfield’s St. Nacho’s books are among my very favorite gay romances. Not only does Maxfield write great romance, the setting she’s developed in Santo Ignacio, or St. Nacho’s to its many residents. The fourth book in the St. Nacho’s series, The Book of Daniel, is just as satisfying and wonderful as its predecessors.

In this book, we are reintroduced to Daniel, the brother of Jake, who was the primary subject of the third book. During book three, Daniel and Jake were several injured in a car accident. Now, a few months after the accident, Daniel is still in St. Nacho’s and undergoing physical therapy. He’s in love with one of the St. Nacho’s firemen, but declaring that love is a challenge. Daniel is too used to letting his money speak for him, plus he’s got plenty of baggage from a divorce, the injury and a challenging childhood.

Daniel manages to give it a go with fireman Cam, but it’s a bumpy ride. The town is very protective of it’s own and Daniel’s not quite one of them yet. And he’s not sure he wants to be.

Maxfield continues her streak of writing flawed characters that needs the healing power St. Nacho’s has to offer. In this one there are some nice twists too since Daniel resists some aspects of the town. As usual, we see a good bit of townsfolk that have been introduced previously. There’s a lot of Jake in this book, since he’s Daniel’s brother. But everyone else gets at least a cameo so you know they’re still around.

I’m not going to say anything else on plot because I don’t want to drop any spoilers. I’ll simply say if you’ve read the other books, pick this one up and you won’t be disappointed. If you haven’t read the others, get all four and embrace the wonderful world of St. Nacho’s.