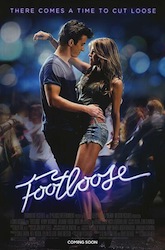 This is the third version of Footloose I’ve seen. Of course I saw the original film back in 1984 (when I was 15 and a high school sophomore). I saw the 1998 Broadway musical version as well.

This Footloose remake does its source material proud and made me ridiculously happy. There’s a healthy mix of new/updated story with a number of nods to the original–the yellow VW, the angry dance in the warehouse, Aierl’s red boots, Ren’s red velvet tux jacket and numerous other things. Some of the original songs also show up in their original form. Kenny Loggins’ “Footloose” opens the film, and, with a nod to the original’s opening credits, there are a lot of dancing feet. However, in this case, we see the dance that the teens who got killed were attending.

Okay…more on the music. “Let’s Hear it For The Boy” also shows up from Denise Williams. Other songs got remade, including “Dancing in the Sheets,” “Almost Paradise” and “Holding Out for a Hero” (which Ella Mae Bowen morphed into an awesome power ballad). “Footloose” and “Boy” also have remade versions. The one ding I’ll give to the film is that its new songs just don’t scream “buy this album” like the originals did.

The plot is, as you would expect, the same as the original. A group of teens were killed coming home from a dance and their small town home freaked out and enabled a bunch of laws to “protect” the children. Ren comes to town from Boston and shakes things up. It’s a simple story, but effectively told and its issues certainly resonate since there are so many ways for kids to end up in trouble.

Julianne Hough, one of my pro favorites from Dancing with the Stars, shows she’s got acting chops to go with her moves. She’s got some great scenes with her pastor father (played by Dennis Quaid) as they talk frankly for the first time since her brother’s death in the accident. Kenny Wormald fills Kevin Bacon’s shoes quiet adeptly. He’s got the right attitude to play Ren and he can also bust out some great dancing. Especially impressive was Miles Teller as Willard. The late Chris Penn played this goofball character to perfection in ’84. Teller puts a great spin on it and just makes you smile/laugh every time he’s on screen.

I hope Dirty Dancing can pull off its remake as well as Footloose did. And speaking of remakes, why hasn’t anyone announced a Flashdance remake yet? That would complete the trio of classic 80s dance movies!

A word about trailers… Three of them stood out today: 1) Big Miracle starring Drew Barrymore as someone trying to rescue whales trapped in ice up in Alaska. This movie, based on a true story, is due out February 2012. 2) Matt Damon in Cameron Crowe’s We Bought a Zoo, which is coming just in time for this Christmas. 3) Dolly Parton and Queen Latifah as dueling members of a church choir in Joyful Noise, slated for release in January 2012. You can click on the links to check out the trailers for yourself.