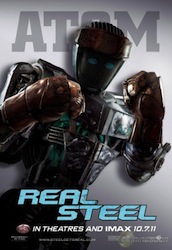 I admit that I was dubious of this film. It just didn’t feel right in some of the initial trailers I saw for it. However, in a bizarre turn, its tie-in ads with Royal Purple Motor Oil got my attention. Something about how the movie was portrayed in that ad started to change my mind. Its A- review from Lisa Schwarzbaum in Entertainment Weekly and Will’s desire to see it moved it to the top of the list for the weekend.

I’m glad I went. The movie is great.

The mix between the human drama of a father and his estranged son and the rock-em-sock-em showdowns between boxing robots is spot on. With the movie set just a couple decades away from the present, the story doesn’t come off as a Transformers prequel. Instead, how robot boxing came about is told over a couple of scenes that don’t come off as too much exposition.

Hugh Jackman and Dakota Goyo, as father and son, play off each other perfectly. Their relationship transformation over the course of the film gives this movie the heart and soul it needs so that it’s not just a robot movie. Goyo is quite the child actor find. He’s done a lot of TV and played young Thor in this summer’s superhero movie. Here he displays a great range. Ultimately you can help but cheer for him and his robot…and for his dad to come around to want to fight for him in the custody battle that kicks the film off.

The other element that makes this film work so well is the use of practical special effects. Many of the robot scenes are done with actual remote controlled robots or with some sort of puppetry. It gives a reality that and a motion to the scenes, that CGI still can’t completely match (look at the Transformers films and you’ll see the difference). For the scenes of robots pummeling each other, that’s motion-capture CGI work. The fighting, however, looks so good because the fight choreographer was none other than Sugar Ray Leonard.

Hopefully this movie, the first I’ve seen of the fall season, is a sign of good things to come as 2011 winds down.