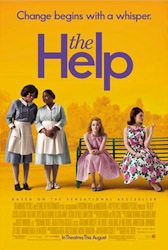 How refreshing to get a movie of this caliber in the summer movie season. The Help is the kind of film that normally shows up in December to appeal to Oscar voters. But how outstanding to get to revel in this kind of film after a summer of superheroes, robots and a lot of 3D mediocrity.

Based on the novel by Kathryn Stockett, The Help tells the stories of maids in Jackson, Mississippi during the civil rights struggle. A young white, female journalist decides she wants to tell the stories of the black maids that take care of children of the rich, white socialites in town. It’s a scandalous idea that produces a scandalous book.

The film is full of such rich textures. The struggle of the maids to maintain their dignity while be relegated to separate bathrooms in their employee’s homes. The appalling behavior of the socialites. The journalists’ attempts to shed light on one of the many injustices of the era. Plus some heartwarming looks at how some women treated their help with respect and love. It’s amazing how much story is packed in just over two hours.

The movie is also difficult to watch at times. It’s painful to see how these women were treated by their employers, by the police and by society at large. You know that while this is story is fiction, these elements are sadly true to the time period.

If not the best movie I’ve seen this year, it is certainly in the top two or three. It’s poster tagline is something everyone should think about too–“Change begins with a whisper.”