This week’s performance show of So You Think You Can Dance was mostly a clunker. There’s usually one show a season where the dances just aren’t up to snuff. This season it was particularly harsh transition because the season has been so fully of greatness, especially in the past two weeks. This week, however, the choreographers either got too experimental or just served up medicority. Thankfully there were some bright spots as we get ready to see who the top four will be. I’m still backing the four I called out when the top 10 were announced: Marko, Tadd, Melanie and Sasha.

Here’s my top three performances last night (and it’s sad to have to be back to listing out a top three whereas in the previous two weeks I couldn’t do top three because of how good the whole show was). 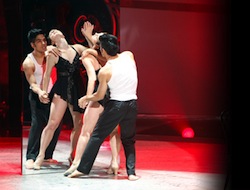 Tadd & Melanie (Broadway by Spencer Liff): Taking a page out of A Chorus Line and All That Jazz, Spencer created a beautiful piece about a choreographer and his muse. Melanie was so deep in character it added so much to her dance while Tadd delivered yet another amazing performance. Most impressive for Tadd, he kept up with her. It didn’t seem like a b-boy and a contemporary dancer, it seemed like two accomplished contemporary dancers performing.

Melanie (Solo): This is what an SYTYCD solo should look like. So often the dancers seem to treat this as a throw-away rather than a chance to really shine. Melanie took the stage like a woman possessed. The look in her eye from the very beginning said this was something to be watched. It had extraordinary movement and musicality. 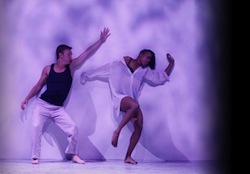 Sasha (partnered with all-star Kent, Contemporary by Tyce Diorio): When Sasha is fierece, she dances amazing. When she’s vulnerable though, something amazing happens. She bared a lot of emotion in this piece and it fed the power of her dancing. In a season where she’s done no wrong, this was the dance of the season for her. I give Tyce a hard time when he does Broadway, but he creates some amazing jazz and contemporary pieces and this will go down as one of his best. The use of the wall was so simple, yet so powerful, allowing for some unexpected movements. Kudos to Kent too. He has really matured as a dancer in the past year.

Here’s a look at the rest of the dance in the order in which they were performed:

Melanie (partnered with all-star Twtich, Hip Hop by Tabitha and Napoleon D’umo): I loved the choreography here, but I thought the gimmick was a little too much and, overall, unnecessary.  It was great to see Melanie go head to head with Twitch in this quirky piece that was a little bit NappyTabs meets Sonya.

Marko (partnered with all-star Janette, Paso Doble by Dmitry Chaplin): Typically I love paso dobles. This one, however, didn’t do it for me. Marko and Janette hit all the right marks and did all the right things, I just couldn’t engage with it. The content of the dance just didn’t pack any passion or power for me.

Ricky (solo): This was just kind of boring. The musicality is good, but we’ve seen all these moves before.

Tadd (partnered with all-star Ellenore, Jazz by Sonya Tayeh): I had such high hopes for this since Ellenore was back with Sonya. Unfortunately, Sonya delivered something that belonged in Cirque du Soleil rather than SYTYCD.  While Tadd and Ellenore did everything they could with it, in the end there just wasn’t enough dance in the piece to engage with it.

Caitlynn (solo): As with Ricky, we’ve seen her make these moves before and while the moves are fine, she needs to push the envelope more.

Ricky (partnered with all-star Jamie, Contemporary by Dee Caspary): Here’s another gimmick gone wrong. It was completely unnecessary to have Ricky dancing with the sticks, especially since he’s not experienced enough to really know how to pull it off. Technically the dance was good, but the gimmick got in the way.

Tadd (Solo): I love seeing what he’s going to pull out of his bag of tricks. His musicality is always great, then he pulls off something like the one-handed hand stand to sell it.

Caitlynn (partnered with all-star Pasha, Samba by Dmitry Chaplin): This is one of Caitlynn’s best dances, right up there with the Argentine Tango from a couple weeks ago. The samba rolls were great and overall the number was just bubbly fun.

Sasha (Solo). I love Sasha’s solos. There’s always something new in them and she reminds me a lot of Ellenore.

Marko (Solo). As with Melanie, Marko gives a good master class in what a solo should be. He always does something new and unexpected.

Sasha & Ricky (Waacking by Kumari Suraj): The first waacking routine in SYTYCD history. Hopefully it won’t be the last because it was fun. Sasha owned this number and embraced its intricate moves. Ricky needed to get himself settled into it more. I wish Marko or Tadd had tackled this with Sasha because they would’ve brought a bit more power to it.

Marko & Caitlynn (Lyrical Jazz by Sonya Tayeh): What a powerhouse dance from Marko. He owned this from beginning to end, dominating Caitlynn. While that was part of the point of the piece, she needed to find ways to stand out a bit more because Marko’s strength here pulled all the focus to him.

Results Update: Outstanding! Melanie, Sasha, Marko and Tadd are the top four. I couldn’t be more thrilled. Any of these four are deserving and I’ll be happy with whoever wins. The Bad Boys of Dance performance was great (and further proof that the score was the best thing about Tron Legacy).