Go to the Cellar and Pray Woman! “Revisiting Carrie” 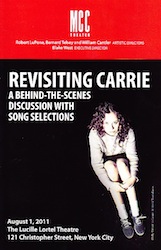 Frequent readers of this blog know that I have an obsession with the 1988 Broadway flop Carrie. Over the years I’ve collected a copy of the Broadway script, bootleg recordings of the London and Broadway shows, a B-reel of the footage used with reviews and even managed to get a complete DVD of the Broadway show. The ’88 version, to say the least is a spectacular mess that is both painful and poignant, depending on which parts you’re looking at.

There’ve been rumblings since 2008 that Carrie was working on a comeback. Tonight at MCC Theatre presented Revisiting Carrie: A Behind-the-Scenes Discussion with Song Selections. The evening’s panel consisted of Lawerence Cohen, who wrote the screenplay to the acclaimed film version as well as the book for the musical, along with the song writing team of Michael Gore and Dean Pitchford, best known to this day for the Oscar winning collaboration on Fame, and new director Stafford Arima. It was Arima who got the ball rolling on this new version by getting in touch with the writers to see what they were doing with the piece, which had pretty much never been legitley staged since ’88.

Cohen, Gore and Pitchford were pretty candid about the ’88 version–praising the Broadway leads (Betty Buckley and Linzi Hateley) while also admitting that what was on the stage in both London and Broadway was not the show they saw in their heads. They talked about wishing they’d surrounded themselves with veterans of musical theater who could point out some of the pitfalls.

One of the most amusing, and interesting, portions of the discussion was around directors who didn’t work with the material in ’88. Mike Nichols (who has among his Broadway directing credits the original Annie) was turned down because he wanted to take the story in a different direction. He didn’t want Carrie to go to the prom. Bob Fosse was also interested in the work, but his direction was deemed to be too dark and he was also concerned about his dancers being able to sing the range of music in the score.

For this re-worked version, 10 of the original songs have been jettisoned (which is probably a good thing from what I’ve seen) and 14 new ones have been written. In addition, other songs have been reworked for the show to be set in the present. The writers chose to set it in the future since bullying is even more relevant today than in the 80s.

We got to hear five songs during the presentation: The re-worked “In,” which was also the opening number in ’88. Carrie’s first song, which is also the title song. I recognized many of the lyrics in this song, but there were new ones too. We heard a brand new song that Sue and Tommy sing in the scene where she asks Tommy to take Carrie to the prom (this replaced the song “It Hurts to be Strong”). The evening closed with a scene where Mrs. White begs Carrie not to go to the prom and then, when she leaves, Mrs. White sings “When There’s No One.” This is another song that seemed mostly unchanged.

One of the big attractions of this production for me is Marin Mazzie as Margaret White. I love, love, love Marin and she was incredible as the religious zealot mom. Her voice was perfect as always, but her characterization was, at times, scary. Molly Ranson is a solid Carrie. The rest of the cast, which we got just a tease of is vocally incredible, especially with the arrangements from the new musical director and vocal designer.

Even though MCC isn’t reviving the original production (which I have to admit I’d still like to see), the sneak peeks of this new version look fantastic. The writers say they are looking forward to seeing the show as it was intended to be, and I’m excited to see what that show is. Tickets go on sale in October with previews starting January 31, 2012.