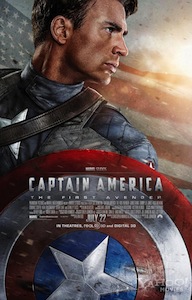 Marvel pulled off quite the feat this summer with three great superhero movies–starting with Thor, then X-Men: First Class and now Captain America: The First Avenger. Thankfully Captain America strikes the same notes as some of the other Marvel movies in that it has a lot of heart and soul. The story is valued over battle scenes and blowing things up, although there is a good amount of that too.

Captain America’s origins are in World War II where the race was on to create the superhuman. Steve Rogers, a scrawny kid from Brooklyn was plucked from among a number of soldiers vying to take part in the experiment. It was his good heart that got him in rather than any pre-existing brawn… his goal was to stop the bullies, wherever they were.

The film extremely well paced from getting to know Rogers before his transformation, checking in on the villains as they get their plans together, seeing Rogers sidelined because they can’t figure out what to do with him and then the full birth of Captain America as Rogers dives into battle to deal with the evil Nazi scientists even though it might mean his death.

Chris Evans, who was previously Johnny Storm in Marvel’s Fantastic Four movies, knows what it takes to play a superhero. Except here he’s traded in Johnny’s bravado for something more grown up and earnest. He plays Rogers and Captain America as smart, strong and humble. It is perfect. The supporting characters are great too: Tommy Lee Jones is well cast as the general Captain America is under. Hayley Atwell is heartbreaking as the special agent who falls for Rogers while helping him become Captain America. Stanley Tucci, breaking from some of the over-the-top roles he’s had recently, is the German doctor whose work culminates in the metamorphasis of Steve Rogers. Dominic Cooper was awesome as Howard Stark, Tony Stark’s father, and founder of Stark Industries.

At the end of the film, after the credits, we got the first look at The Avengers, which hits theaters May 4, 2012. The film brings together many of the heroes Marvel has rolled out over the past few years: Iron Man, Thor, Hulk, Hawkeye, Black Widow and Nick Fury. Check out this set of teaser posters that have just been released (you can click on the image to see a larger view):

It’s going to be exciting to see the Joss Whedon-directed The Avengers next summer. I have absolute confidence it’s going to be outstanding. DC and Warner Bros. should take some notes as it would be great to see a Justice League movie get together sometime this decade.