It’s hard to believe So You Think You Can Dance is already half way through the season! As the top 10 gets started, I wanted to take a brief look back at my likes from the Top 20 show.

Among the guys Jess, Nick, Robert and Marko were my picks. Marko and Jess got to the top 10, Robert lost steam for me pretty quick and I’m still disappointed that Nick got bounced when he did. Jess, despite being an early favorite, tested me early in the competition with his Broadway-demonaor coming through all the time, but in the past couple weeks he’s lost that and found other, more engaging, characters.

On the girls side I called out Sasha, Iveta, Melanie and Jordan. My picks were much better here with only Iveta missing out on top 10 (and, as with Nick, I think she was let go before her time). Overall, my girl picks were pretty spot on.

The surprise in the show for me so far has been the strength and genre flexibility of Tadd and Chris. Russell, back in season 6, showed that a crumper can go all the way.  Chris got tossed out (in a week I thought other guys deserved to go), so we won’t know what else he could deliver. Tadd offers something amazing every week and I’m glad he got to top 10.

Let’s talk picks for top 4 (note: this part of the post was written before the Top 10 results show): For the boys, Marko seems a lock and I’d like to see Tadd there too. Mitchell and Ricky don’t give enough range and need to step up or they’ll be out soon. Jess, if he keeps on the track he’s on, could be a dark horse coming into top 4. Girls are much harder to choose. It’s going to be a huge battle between Sasha, Melanie and Jordan. It’s will be hard for Clarice and Caitlynn to get past them. If I had to pick two, I think it’s Sasha and Melanie with Jordan as the wild card to sneak in.

Moving on to this week’s performance show… it was amazing! Of the 10 couples dances, only one was a clunker. I loved everything else so much I’m not going to try to pick a top 3 for this week.

Let’s talk about the clunker:

Mitchell (partnered with all-star Melody, Broadway by Tyce Diorio): This was doomed from the start. As soon as Tyce said they were using “Take Off With Us” I knew this was trouble. Tyce should be banned from doing anything remotely Fosse because it rarely turns out right. The choreography was choppy and the dancers, even the all-star, didn’t quite know what to do with it.  I think it’s also tough to take something that has iconic choreography and change it. I admit, I kept seeing the original performance in my mind’s eye.

Here’s a look at the other nine couples dances, in the order in which they were performed:

Marko (partnered with all-star Chelsie, Samba by Jason Gilkison): What an intricate samba this was, especially the work Marko had to do with Chelsie over his head. This was outstanding and showed off Marko’s strength in great ways. Marko continues to excel at everything this show throws at him. 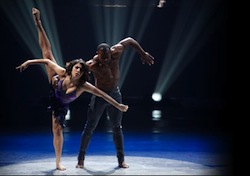 Jordan (partnered with all-star Brandon, Contemporary by Desmond Richardson and Dwight Rhoden): Extraordinarily beautiful. Jordan was the perfect mix of powerful and graceful. She kept up perfectly with the always-strong Brandon.

Tadd (partnered with all-star Comfort, Hip Hop by Chuck Maldonado): I love seeing Tadd in something close to his style. He was a great partner for Comfort as they had a ton of sexy swag. With great character and being perfectly in sync, this was tremendous.

Caitlynn (partnered with all-star Pasha, Argentine Tango by Miriam Larici and Leonardo Barrionuevo): Fabulous! Wonderful intricate choreography that Caitlynn nailed. This was her best dance of the season so far with a perfect combination of performance, passion and precision. 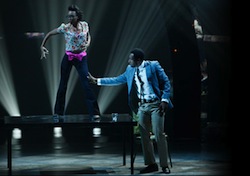 Sasha (partnered with all-star Twitch, Hip Hop by Christopher Scott): Sasha is usually cast as the power woman in her dances. She’s still powerful here, but with a soft, sensual, sexy side too. These two together had great chemistry. This will go down as one of the best hip hop numbers the show has ever had.

Jess (partnered with Kathryn, Contemporary by Stacey Tookey): Jess is growing in his performances so well. The first glimpse came in last week’s hip hop. This week he struck the right performance again in this moving piece. His partnering is much improved also. This was the first time he looked comfortable with the lifts. 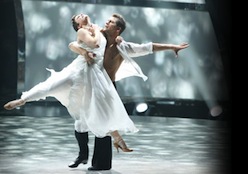 Melanie (partnered with all-star Pasha, Viennese Waltz by Jason Gilkison): I love the Viennese Waltz. This wasn’t a typical one, but it was gorgeous! Melanie glided across the floor, often in the air. There was so much flow and grace to this that it was simply sublime.

Ricky (partnered with all-star Allison, Jazz by Tyce Diorio): I liked the nightmarish quality here and really loved Allison’s work in this. Ricky was the best I’ve seen him as he lost some of his “aw-shucks, I’m young” look. Some of the lifts were quite outstanding, especially Ricky lifting Allison up with just one arm.

Clarice (partnered with all-star Robert, Bollywood by Nakul Dev Mahajan): Such a fun number, and one of the most intricate Bollywood pieces I’ve seen on the show. The two were in sync and moving fast. Very well done.

And…a brief word on the solos. There were only a few that stood out for me: Marko, Melaine (who used an amazing version of “You’re the One That I Want” that I’d never heard before), Tadd and Sasha. Jess’ caught my attention only for about the last 5 seconds or so with his leg work. Everyone else seems to just be going through the motions rather than using the 30 seconds to really make a statement. Hopefully folks will step up their solo game.

Results Show:  Mitchell sort of had to go after that really unfortunate number from Tyce. It clearly didn’t connect with anyone. The girl elimination was so difficult. Jordan and Clarice both dance great Wednesday night. I’m glad Jordan stayed because I feel she is stronger overall.

I wasn’t impressed by the group dance. It was one of the clunkiest of the season, and why weren’t the all-stars in that? I loved the dancer from American Ballet Theatre, just not the music he was using. The musical guest was not my thing at all.

One important note from both night’s of the show this week: Neil Patrick Harris rocked it as a judge!