The top 10 were revealed this week on So You Think You Can Dance and for some it was a very difficult week for them to get there. Some though excelled in a week where they had to do two couples routines. An extra special bonus this week was Jesse Tyler Ferguson (from Modern Family and a few Broadway shows) on the panel as guest judge. Not only was he funny, he gave great commentary. I’d be great to get him and Kristin Chenoweth on the panel together!

Even with 12 dances this week, it was easy to do a top 3 dances because there were some that rose above the pack and blew me away: 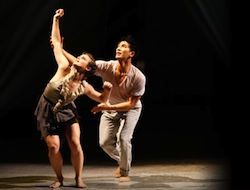 Melanie & Marko (Contemporary by Dee Caspery): Such amazing movement from these two–controlled yet fluid at the same time. I think this became my favorite dance from them. It was so stark and poignant. I’m sad these two have to break up next week… but on the other hand it’s going to be interesting to see what they can do with other partners and with the All Stars. 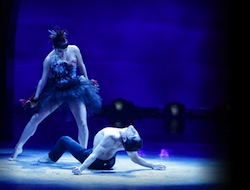 Jordan & Tadd (Contemporary by Travis Wall) Another outstanding piece from Travis Wall. I loved how Travis used Tadd in this piece. Tadd’s shown himself very capable in the contemporary realm, but here Travis let him use some of his B-boy moves to great affect as well. Jordan was also extraordinary, finding so many graceful, yet angry moves–she looked liked she came right out of Black Swan. Great to see these two on the road to Top 10 with such a strong performance. 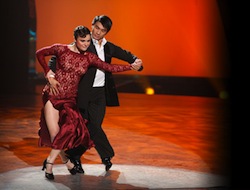 Melanie & Marko (Tango by Louis Van Amstel) What a tango Louis threw at these two. The work they did on the edge of the stage was incredible and then to cap off the number with the move through the legs was superb. They had everything going here with passion, power and performance that was also deliciously sexy.

With so much on the line last night, I’m surprised that I’ve got three numbers that land in the bottom of my list this week. These all fell (and fell hard) very flat for me.

Caitlynn & Mitchell (Hip Hop by Christopher Scott): Two contemporary dancers tried hip hop and looked exactly like contemporary dancers doing hip hop. The movements that should have been powerful and sharp, all got rounded off. They were also not in sync at times either. It was a huge disappointment. I also didn’t like how the judges sugar coated their criticism of this either.  “But you’re great” they would say… well in this case, they weren’t.

Caitlynn & Mitchell (Jazz by Travis Wall): Yes, these two, who wowed me just last week, were a mess this time out. Travis brought some great choreography to the table, but these two just did have the character or conviction to pull it off. It was technically good, but the performance wasn’t there. I’d love to see Melanie & Marko or Jordan & Tadd give this the performance the choreography deserved.

Jordan & Tadd (Broadway by Spencer Liff): It pains me to not like something these two do, but this was way off the mark. I didn’t like the choreography with the music. Most importantly, I didn’t think Spencer, who I normally like, gave these two enough good stuff to work with. It was quite disappointing to see the dancers underserved in such an important week.

Now on with the rest of the dances in the order they were performed:

Sasha & Alexander (Paso Doble by Tony Meredith and Melanie LaPatin): I love the choreography here and making the woman more than the cape. Sasha tore this up and Alexander did a good job keeping up as well.

Kyle & Ricky (Broadway by Spencer Liff) Complete lack of chemistry between these two–again. He also didn’t partner her well as all of the movements seemed very tight and closed off. There was also a lack of commitment from them to really sell the dance.

Clarice & Jess (Lyrical Hip Hop by Christopher Scott): This scared me. I couldn’t imagine either of these two pulling this off. Jess was shocking. He totally became someone else and did a solid job with the dance. I thought Clarice was less comfortable, but she did okay.

Sasha & Alexander (Jazz  by Tyce Diorio): This is one of the best dances for this couple the whole season. Sasha was her usual awesome self and Alexander had such a breakthrough. Tyce’s choreography was excellent too. This dance didn’t really looked choreographed, it seemed to come from a very organic place from the dancers. This is really my number four top dance for the night.

Ryan & Ricky (Cha Cha by Louis Van Amstel): This style didn’t work well with these two. Ricky certainly embraced it more and moved in it. Ryan seemed to be thinking to much about it and the over-delivering.

Clarice & Jess (Jive by Tony Meredith and Melanie LaPatin) This was a fun piece and Jess gave his best partnering of the season. He’s clearly more comfortable with lifts now. Amazing kicks from these two as well.

Results Show: I’m glad Ryan is gone. Ultimately I didn’t like her style or her partnership with Ricky. Sasha, I think ended up in the bottom three because someone had too. Caitlynn I thought deserved to stay over Ryan because overall she’s been strong (despite a really bad performance night) and her dance for your life was good. Among the guys, I’m sad to see Alexander go, especially because he had such a good performance night. I disagree with the judges on his dance for your life. I thought Mitchell’s was quite weak and something we’d seen before, whereas Alexander really tried to bring it. Ricky did a great job in his solo and I’m glad he stayed, and that his partnership with Ryan is over. For the guys, I would’ve sent Mitchell packing.

Next week the All-Stars return for the top 10!