Choreography from Tabitha and Napoleon D’umo is one of the the top things I love about So You Think You Can Dance They made me rethink what I thought Hip Hop was and what it could be. The first time I tuned in to SYTYCD their “Bleeding Love” number was among the first that I saw. I was hooked on them and the show immediately. They bring such an amazing depth of emotion and movement to their work. Anytime they’re working on the show I know I’m going to be blown away. Last night was no different.

Here are my top three from last night (and, yes, NappyTabs grabbed the top two): 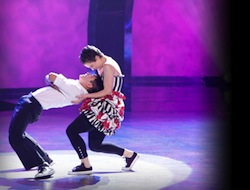 Melanie & Marko (Lyrical Hip Hop by Tabitha and Napoleon D’umo): Absolutely sublime! Everything about this number worked–the story, the choreography, the characterization from the dancers, the performance, the musicality.  Melanie and Marko work so well together as a couple it’s amazing. In just a three weeks they’ve truly become the power couple as a couple of the judges said last night. They trust each other, the show their emotions well together and that made this dance soar. 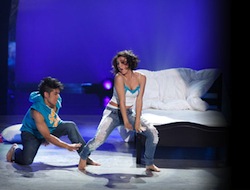 Jordan & Tadd (Hip Hop by Tabitha and Napoleon D’umo): This was the “fun” dance of the evening. The two wake up next to each other not quite rememebering how they got there. The choreography of them getting dressed was hysterically funny (and Tadd should go shirtless more often, that guy is built!). Jordan, even though she was feeling nervous about the piece, fully embraced the character and the fun of it all. It was great to see Tadd in his style too because he rocked it. For me, these two are another of the power couples.

Sasha & Alexander (Contemporary by Dee Caspray): Here’s my other pick for power couple. Sasha and Alexander consistently perform great, and also land in my top three consistently. The concept of the number was a little weird, with her coming out of the piano he was playing, but it was gorgeous and powerful. Sasha owned this dance and the way she wrapped around both Alexander and the piano was incredible.

And, of course, there’s one at the bottom of my list from last night:

Ryan & Ricky (Contemporary by Sonya Tayeh): I still find these two to lack chemistry while they’re performing and, even worse, last night they seemed to have no emotion while they were doing this wonderful piece of choreography from Sonya. I couldn’t fully engage with these two. I’d love to see this done over by any of the power couples who I think would really infuse some powerful emotion into this and, therefore, breath some life into it.

Here’s a look at the remaining couples dances in the order they were performed:

Caitlynn & Mitchell (Samba by Jean Marc Genereux): My one fault with this was that there didn’t seem to be as much fluidity between the different sets of steps. It looked like there was too much hard stops  between movements. Mitchell did seem to fare slightly better here than Caitlynn. It wasn’t horrible by any means, but we’ve seen better ballroom from other competitors this season.

Miranda & Robert (Broadway by Tyce Diorio): Miranda was mesmerizing in this dance. Her opening move, to slide down Robert’s leg, was a big wow. Robert held his own here, even though he was way outside his hip hop style. He lacked some extensions here and there, but he was a lot of fun. Most importantly these two are partnering very well together.

Ashley & Chris (Jazz by Sonya Tayeh): Something was a little off here. I’m not sure if it was the music (as Nigel thought) or the choreography just didn’t sit well with these two or if it just had the unfortunate position in the show to follow Melanie & Marko. I liked it well enough, but not as much as I should. The two seemed to dance it technically well and I thought they worked their characters pretty well.

Clarice & Jess (Foxtrot by Jean Marc Genereux). I loved Clarice in this dance. She was sparkling and moving so fluidly across the stage. I didn’t think Jess was in the right character. He seemed to have too much Broadway-face rather than a smooth ballroom demeanor. Thankfully he was partnering much better this week and that helped this dance look technically great.

There were also two group numbers last night, which were a fun addition to the evening.

Chris, Clarice, Marko, Miranda, Mitchell, Ryan, Sasha & Tadd (Broadway by Tyce Diorio): This was a lackluster number because I don’t think the dancers were given enough to do. They all performed it fine, but I think something a little more challenging to show them off would’ve been a better choice.

Robert, Alexander, Jess, Ricky, Melanie, Jordan, Ashley & Catilynn (Contemporary by Dee Caspray): I liked this a lot. The story was fun (a medieval poisoning) and the dancers conveyed the fun, yet diabolicalness, to the audience perfectly. I loved the fluid motion of the whole thing too. Dee did a great job with these dancers.

In the results, I fear most for Ashley & Chris because that number really didn’t do them any favors and it was the one that got the most negative feedback from the judges. I, of course, would rather see Ryan & Ricky depart for their second week of underwhelming me in the chemistry department.

Results Update: I’m, of course, sad that Ryan & Ricky didn’t get dropped into the bottom three. Of the folks in the bottom three who had to dance for their life I thought Ashley and Mitchell had the weak solos and should’ve gone. I’m stunned they let Miranda go after the deserving praise heaped on her last night. Robert I think still had plenty to show, but I’d rather lose him or Chris who I think adapts to other styles better than Robert does.

The guests were outstanding tonight. AXIS dance company was incredible. The world champion dancers who performed defied gravity. I’ve never seen anything like them… and I would like to see more.

And, Kristen Chenoweth, please come back to judge again. You were a blast!