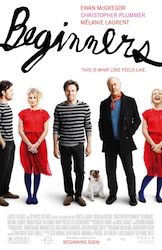 Beginners is a quiet yet chaotic movie that features some excellent performances, tender moments, funny moments and some confusing story telling. Overall, it’s a good movie that leaves you not feeling completely satisfied.

The plot has been pretty widely discussed since the movie rolled out in limited release a couple weeks ago. An elderly father reveals to his son that he’s gay, has a boyfriend and has terminal cancer. The film opens shortly after the father’s death and then hops back and forth through time, going as far back as seeing what the young son’s life was like at home with his mother, looking at the father/son relationship after the father came out and looking after the death at how the son is coping and with a new relationship he’s forming with a woman he’s met.

I didn’t have trouble following the story with all the hopping, but I think the hopping kept me at an emotional distance. It seemed to jump before I was completely finished with a scene and that kept me somewhat disengaged from the story. The time jumping made sense since things going on with his new relationship was trigging memories, but I think it could’ve been somehow done differently to keep the emotional core in tact  better. It could also be that there was too much story here to do justice to any one part of it.

What works termendously for this film is the performances from Ewan McGregor as the son, Christopher Plummer as the father and Mélanie Laurent as the son’s love interest. The interplay between McGregor and Plummer is sublime and in some ways I think they move would’ve been just fine had its entire focus been on that. On the other hand, McGregor and Laurent remind me a lot of Ethan Hawke and Julie Delpy in Before Sunrise and that is certainly a good bar to set. Again, the McGregor/Laurent story could’ve been a standalone movie as well.

It’s also important to point out how entertaining the relationship between McGregor’s character and Arthur the dog is. The dog belonged to the father and the son begins taking care of it. The dog is often hysterically funny between his facial expression and his occasionally subtitled thoughts.