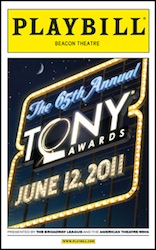 The Tony Awards are tomorrow night and as usual I’ve got a few thoughts and predicitions about the night.

There were some pleasant surprises in the nominations. I didn’t get to see The Scottsboro Boys because it closed far too fast on Broadway. Critically acclaimed, this show didn’t catch with audiences but the nominators remembered it and I’m glad to see it got 12 nominations (the second highest number of any show). I’m not sure how many of those turn into awards since this show closed in December, but at least it’s well honored in nominations.

Women on the Verge of a Nervous Breakdown, a show that was mixed with the critics and ignored by audiences, picked up three critical nominations. Two of the women–Laura Benanti and Patti LuPone–scored much deserved nominations as did David Yazbek for his superb score. Here’s a sample of Women with Benanti singing “Model Behavior” from the Drama Desk awards.

I think Benanti has a good shot of winning featured actress. Yazbek has tougher competition against the juggernaut The Book of Mormon (14 total nominations) and The Scottsboro Boys, which is the final collaboration between John Kander and Fred Ebb.

While we’re talking musicals–I think Book of Mormon picks up a lot of trophies. Their lead actors may cancel each other out though and let Norbert Leo Butz (Catch Me if You Can) or Tony Sheldon (Priscilla Queen of the Desert) to take the trophy. Sutton Foster is pretty much a lock for lead actress for Anything Goes.

Over in the play category, for Best Play there’s little doubt it’s going to be War Horse. The show is already receiving a special Tony for it’s puppet work. Check out this clip and then tell me how this show doesn’t win (I’m seeing it later in the summer and I can’t wait!).

It’s pretty clear cut for Best Play Revival too as the powerful The Normal Heart is the show to beat. Leading Actor in a Play is probably the most difficult choice of the year. You’ve got Brian Bedford’s comedic cross-dressing role in The Importance of Being Earnest, Bobby Cannavale’s addict in The Motherf**ker with the Hat, Joe Mantello’s angry AIDS activist in The Normal Heart, Al Pacino’s Shakespeare turn in The Merchant of Venice and Mark Rylance’s second powerhouse performance of the year in Jerusalem. I hope Mantello wins, but this could really go any way.

The only other play nomination I feel strongly about is Ellen Barkin in The Normal Heart. She stops the show with her searing monologue about losing research funding. I don’t see how any of her competition can top that.

As for the Tony Awards show itself. It will be interesting to see it adjust to a smaller home since they had to leave Radio City Musical Hall because a Cirque du Soleil show moved in there. It’s great Neil Patrick Harris is back as host and I’m looking forward to him performing a bit of Company (which is in select movie theaters this weekend).

A major issue I have with tomorrow’s program is that Spider-Man: Turn off the Dark gets to perform. Spider-Man couldn’t get its act together to open as part of the 2010-11 season. It would be far more appropriate to give some air time to Women on the Verge.. or Bloody Bloody Andrew Jackson or Baby It’s You or The People in the Picture. Those are all musicals that are nominated for the season. Spider-Man opens on Tuesday and will be the first show of the 2011-12 season. It shouldn’t be on the Tony stage until this time next year, and then only if it gets nominations.

Meanwhile, too all of this year’s nominees…. good luck and have a great show!