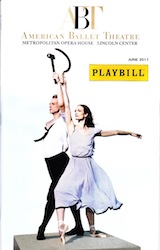 We attended are second ballet in the American Ballet Theatre series last night. This time it was Lady of the Camellias, which is based on a novel of the same name by Alexandre Dumas, fils. The novel has been adapted into an opera, La Traviata, and a number of movies under both this title as well as Camille. Likely the most famous of the films is the 1936 George Cukor version starring Greta Garbo.

The story is a tragic one. Marguerite Gautier, a Parisian courtesan has died and her possessions are being sold off. Her lover Armand is distraught and remembers their time together–including how they met, how their love had to be a secret, how they broke up and how Marguerite ended up dying alone after a final, awful meeting between her and Armand.

Ballet seems like the perfect medium to tell the story of a doomed love. The passion shown as Armand and Marguerite meet in Act I, and the care he shows for her as she has a cough attack. He doesn’t realize at the time how sick she is.  As the two embark on a secret affair, that soon becomes public, the dancing is sublime and beautiful throughout Act II. The final act has another passionate dance as Armand and Marguerite share one last night before a very fiery and sad separation. 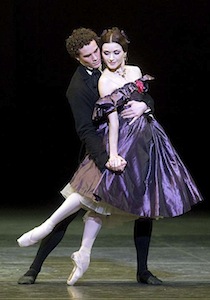 ABT principal dancers Irina Dvorovenko and Cory Stearns were incredible as Marguerite and Armand. We saw Stearns a couple weeks ago in Don Quixote and loved him there. Here he’s a totally different character as he’s love struck and heartbroken and his dancing moved  between euphoric and sadness. Dvorovenko was amazing as her dancing changed as Marquerite got sicker. Dvorovenko and Stearns together were mesmerizing as  a clearly in love pair.

The music was stunning also, and added to the emotion of the piece. Chopin’s score uses the full orchestra in the first and third act, but in the second act the score is all piano. This added a haunting, deconstructed quality to the act and really worked well with the excellent choreography.

I’m glad we saw this production. It was excellent and it was great to see a very different style from what we saw with Don Quixote. In two weeks, we’re back to ABT for Cinderella.