The scenes of devastation from Tuscaloosa are unbelievable.

My mom and I moved to Tuscaloosa in July 1978 and it was my home until June 1993 and my mom continues to live there. We’d chatted early Wednesday morning while I was on the Acela traveling from New York to Providence where I was working for the day. During the trip up she told me of the rough weather she’d already seen that morning–rain, storms, hail and a big tornado that had gone through Cullman.

On my way home in the evening, at 5:43pm, I got an email from her that said “Weather is horrendous. One heading towards us us.” At 6:27pm I got a follow up that said simply “I am safe.” At 6:51pm came “Hit DCH, University Mall. No Power.” So I hopped on Amtrak’s wi-fi (which, by the way, needs a lot more bandwidth during the evening rush) and between that and my phone, I went looking for info since she was only getting fractured pieces of information.

It didn’t take long to figure out there was epic damage. The Twitter feed for the Tuscaloosa News was full of information from its reporters. It became clear that the epicenter of destruction was Alberta City, the area around McFarland Blvd & 15th Street and Rosedale Court. The path was huge, in many places a mile wide. I fed this information back to her through email. Luckily mom lives 4 or 5 miles away from all this so her largest inconvenience was a lack of power until early the next morning.

The pictures are disturbing. I’ve never seen destruction like this. I was in New York during the World Trade Center disaster in 2001. The loss of life was much higher and the horror huge, but the swath of rubble was contained to a few blocks. In Tuscaloosa it’s miles of destruction. 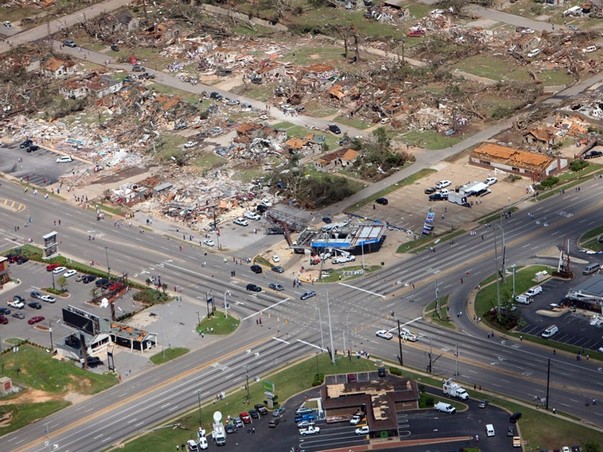 Above is the intersection of McFarland Blvd. and 15th Street, two major thoroughfares in town. The lower quadrant, which is a bank, seems to have minimal damage but as you look diagonal from there and towards the top of the picture, that’s mostly flattened houses. 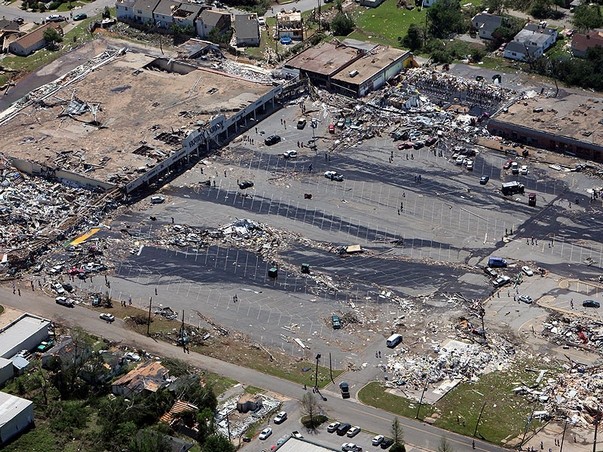 Above is the rubble of the Wood Square shopping center, just north of 15th Street on McFarland. I worked at a video store in this strip mall while I was in college. The video store closed a long time ago, but now the shopping center is virtually gone. Also wiped out, a Krispy Creme doughnut shop that I’d often gone to for “hot now” doughnuts and several restaurants that had been around from my high school and college days. 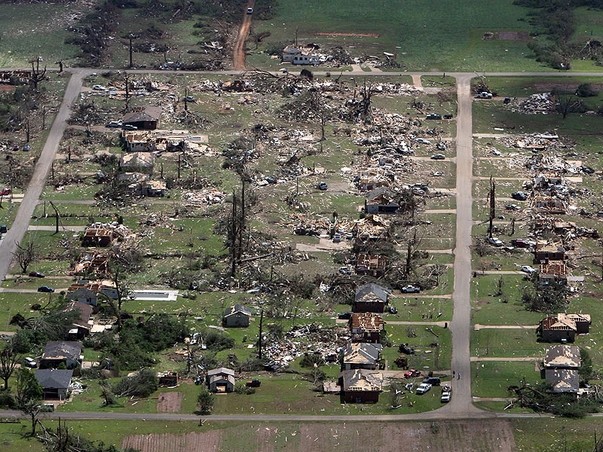 Above is a look at the Alberta City, a mostly residential area of the city. So many aerial shots of the city look like this with so many homes damaged and destroyed.

The most disturbing thing about the pictures is that even though I know these places well, so many things are unrecognizable because all they are now is a pile of debris.

I’m glad all the right things seem to be happening to get help to the people in Tuscaloosa, and throughout the south, who were affected by Wednesday’s violent tornadoes. And I’m glad the city’s death toll seems so low, currently hovering around 40 (although it seems like that’s going to have to go up as the leveled homes are searched). It will be a long while before it’s all cleaned up, but I’m sure it will be put back together even better than it was before. Stay strong, Tuscaloosa.