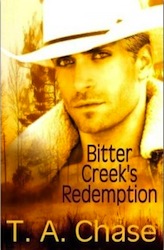 I went with another western themed book as I picked up Bitter Creek’s Redemption by T.A. Chase off of my Kindle bookshelf.

Travis Ramsey came to Bitter Creek to avenge his brother’s death. His world his shaken to its foundation when he meets Eagle, a half Indian/half white stable worker. Eagle knew his brother and helped him in his dying moments. Travis has to overcome his own prejudices to work with Eagle and Eagle’s white brother who is also a US Marshall. Travis gets another shock as he must face the fact that he’s attracted to Eagle, which brings up memories of his father beating him when he found Travis experimenting with another man. Of course, even though Travis is a grown man now, there are still plenty of dangers to be overcome as he falls in love with Eagle.

Besides the budding romance, there’s a mystery to solve too: Who killed Travis’ brother and why? Was it just a land grab by the town’s competing ranchers or was it something more? Chase builds this part of the book perfectly making it an intense page turner. I was pleased that I didn’t figure out who was pulling the strings until it was revealed.

I’d love to see a sequel to see what else might go on in Bitter Creek.

Next up: Playing the Field, Volume 1 by J.M. Snyder