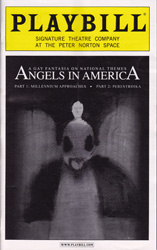 Angels in America has had an outstanding run at the Signature Theatre. The show was originally scheduled to run from September to December, but it has extended four times. We were compelled to return to see part two, Perestroika, last night because the cast recently changed as some members couldn’t continue with the extension.

Key to our decision to see the epic show again was the addition of Michael Urie in the role of Prior. We loved Urie in Ugly Betty and were thrilled with his stage turn in The Temperamentals last year. He is superb in the role of the reluctant profit who faces an unknown future as he grapples with a disease that might kill him. 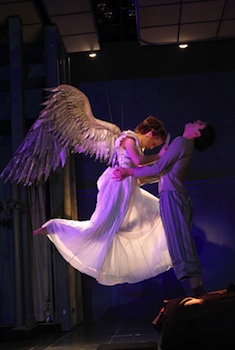 The others joining the cast were all excellent–Adam Driver (Louis), Sofia Jean Gomez (The Angel), Keira Keeley (Harper), Lynne McCollough (Hannah). They’ve all come into their roles very well, holding their own with continuing cast members Bill Heck (Joe), Billy Porter (Belize) and Frank Wood (Roy Cohn). I particularly like the nuances from Heck and Wood that I didn’t see in September when we saw Perestroika the first time. Heck is so tragic as the closeted Morman who can’t come to terms with who he is. And Wood found new ways for me to sympathize with the horrific Roy Cohn.

We had a new perspective on the show this time. Seeing the two parts initially, we were in the first row each time. It was a nice, intimate experience to be right there on the edge of the stage. This time we were five rows back and could take in the border picture. I can’t rave enough about the scenic design. It’s a small stage that is used so well with turning sets and curtains to create so many different spaces.

Angels is in its final extension, which is slated to end April 24. If you have the opportunity, don’t miss this extraordinary theatrical event. The play is timeless and the casting and direction the Signature has put together is sublime. 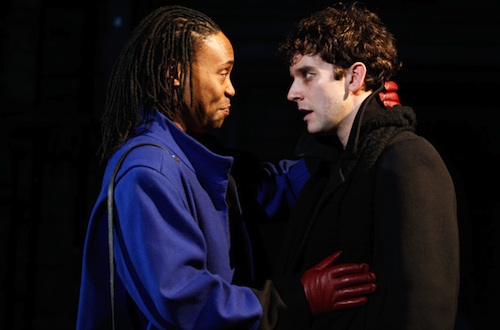