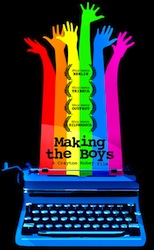 Crayton Robey’s documentary Making the Boys covers far more than the genesis of the play and movie versions of Mart Crowley’s groundbreaking The Boys in the Band. It’s also a look at Crowley’s life and a time capsule of gay history from the 60s and 70s.

Crowley started in the entertainment business working on the film Splendor in the Grass, which is where he met Natalie Wood and her husband Robert Wagner. Through their friendship he got an agent and started writing in Hollywood, including a comedy pilot starring Bette Davis that was never picked up. Once he returned to New York, he looked at the work Tennessee Williams and Edward Albee were doing and decided he want to write something with the biting realism of Who’s Afraid of Virginia Woolf.

A few weeks later he had the first draft of The Boys in the Band. With it’s stark, realistic portrayal of gay friends living in New York (the first time homosexuals weren’t portrayed as weak, miserable or dying), it had a difficult road getting made. Agents didn’t want to send the script out or, once it had a producer, didn’t want to send their actors to audition. The show finally premiered in January 1968 in a small off-Broadway space. By spring, it was a success and moved uptown and ran for 1,001 performances. In 1970 William Friedkin directed the film using the stage actors.

With the birth of the gay rights movement, following the July 1969 Stonewall Riots, some considered Boys to be outdated and not the image that gays should be portraying. Many in the cast had a hard time finding work after Boys because they were so linked to the material and, despite its success, it carried a stigma.

I know when I first saw Boys it struck me as sad that the friends were largely bitchy and mean to each other. It’s a rough film to watch, in the same way that Virginia Woolf can be. But there’s also a deep emotional undercurrent there because it feels like a very real situation. Now, more than 40 years later, I know people who still fit the archetypes in the film. The play that was groundbreaking at the time is still relevant today despite how much has changed in the gay rights movement because these people still exist even in the younger generations of gay people.

The story of the actors and production staff is quite sad. Four of the nine member cast as well as the director and producer died of AIDS in the late 80s and early 90s. Another cast member died of leukemia. Crowley, meanwhile, went on to work on TV’s Hart to Hart, again at the request of Wagner and Wood. He’s also written more plays, including a Boys sequel entitled The Men from the Boys.

Robey’s film works great to bring out why Boys is an important work in gay theatrical and film history. Interviews with playwrights, authors, activists, two suriving members of the original cast (Laurence Luckinbill and Peter White), historians as well as Friedkin and the film’s executive producer Dominick Dunne along with many others put everything into perspective.

Anyone whose seen Boys should catch this documentary. And if you don’t know what Boys is, see the original film and then see this documentary to learn why it’s so important. Meanwhile, I plan to rewatch Boys soon because it’s been a while and this doc makes me want to revisit it.