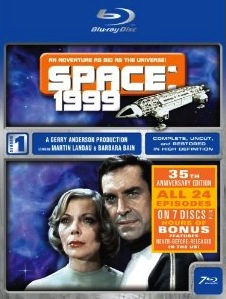 I hate buying the same movie/program over and over again. It’s something I try to avoid. Every now and then though a release comes along that forces me to cast that rule aside. The recent release of Space: 1999 on Blu-Ray falls into that category.

I’d initially acquired the series on VHS by recording the episodes from Sci-Fi Channel back in the late 80s. In the early 90s I bought them all on laser disc. When I got rid of my disc player, I transferred back to VHS. A few years ago I picked up the initial DVD release.

For Blu-Ray, the episodes got remastered for high-def and 5.1 sound plus loads of special features were added to the discs. There are two episodes with audio commentary from series creator Gerry Anderson. Two episodes have text commentary (and those happen to be on two of my favorite episodes–“The Last Sunset” and “Space Brain”). There are also tons of stills behind the scenes materials, demos of the opening titles and theme, deleted scenes, music only tracks and new documentaries about the making of the show.

The centerpiece of this set though are the remastered episodes. I had no idea these episodes could look so good. They are leaps and bounds ahead of any version I’ve seen–including when they were originally broadcast on TV in the 70s. The 5.1 audio is particularly amazing as the sound effects of the space battles fly around the room and, perhaps most importantly, the disco-esque theme song really rocks in 5.1.

Reports indicate that season 2 will be out later this year and I will pick up that set too!