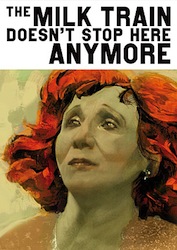 An incredible performance from Olympia Dukakis anchors the Roundabout Theatre Company’s production of the 1963 Tennessee Williams play The Milk Train Doesn’t Stop Here Anymore. Dukakis plays Flora Goforth, an American window who has retreated to her home in the Italian mountains to write her memoirs and to die. She has a small group of people around her–a secretary doing dictation, two people who take care of the home, a close friend… and a stranger who shows up in her final hours.

I must admit I’m not completely sure what the point of the play was. However, it was still riveting as Flora confronted the final hours of her life. I think the New York Times review by Charles Isherwood sums in up best: “…fitfully moving, patchily eloquent but often preposterous drama about the loneliness and fear that can attend our going forth into the great unknown. ”

Dukakis makes the whole thing worth while as she devotes herself completely to Flora’s desire to get the most out of the end of her life. Edward Hibbert plays her friend “the Witch of Capri” who she calls on when the stranger arrives at her house. Hibbert is funny and a bit creepy, but his character’s point in the play was one of the things that left me wondering. Maggie Lacey is the put upon secretary Mrs. Black who is trying to do what Flora needs her too, but also at her breaking point as the lunacy increases… plus she’s got a crush on the stranger. Darren Pettie is Christopher Flanders, the stranger who is also known as the angel of death. He holds his own against Dukakis’s fiery moments, but also plays out some very touching scenes with her. The strength of the ensemble takes this play above and beyond its, at times, muddled script. It’s definitely worth the visit to see Dukakis .

Milk Train… is not one of Williams’ better known plays. It premiered at a festival in Italy in 1962. It debut on Broadway in 1963 and played only 69 performances. Another attempt for the work in 1964, with Tallulah Bankhead and Tab Hunter, played only 5 performances. In 1968, Williams adapted the play into the film Boom! with Elizabeth Taylor and Richard Burton. By Williams own admission he never quite got this story right.