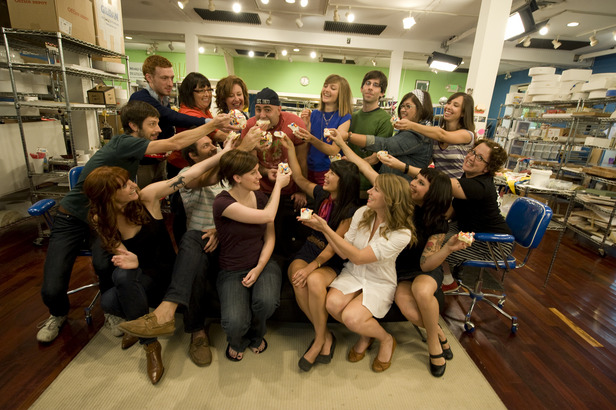 This past Thursday, one of my favorite shows went off into the sunset.

I’ve loved Ace of Cakes since it premiered on Food Network August 17, 2006. Before that, Chef Duff Goldman had appeared on a number of Food Network Challenges showing off his extreme cakes with varying success. No matter what happened in the challenge, Duff was infectiously cheerful, funny and creative.

Ace of Cakes took that personality and ran with it. I loved that Duff surrounded himself with fun, creative people and spent his days doing exactly what he wanted–making incredible cakes. The staff of bakers, decorators, interns, bakery staff were always a blast to watch. Not to mention that every week it was interesting to see what they would pull off in cake. It didn’t matter if it was for a birthday, wedding or anniversary cake for an everyday person or a huge cake for an event–like a Harry Potter premiere or the 25th Anniversary of Back to the Future, which was the last cake featured.

Since the show premiered, attempts to copy the format were never as entertaining. Shows like Cake Boss or Fabulous Cakes on TLC just didn’t work for me because they don’t have the core group of friendly, fun people that make up the staff of Charm City Cakes. Hopefully there can be some Ace of Cakes specials in the future so we can occasionally see what’s up in the bakery. 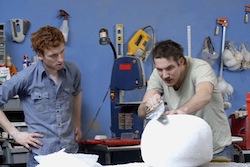 The cancellation of Ace of Cakes also brings to an end one of my TV crushes. Mark (left, watching decorator Ben work on a cake), the bakery’s procurement guy, was one of my favorite men to watch on TV. Red hair, occasionally scruffy, good sense of humor and technically handy (he often worked on getting cakes to light up, smoke, or whatever extreme element was needed), for me he was the show’s hot guy. For the show’s first couple years, Mark would lurk in the background and it was exciting to keep a watch for him. More recently he was on camera more, even making it into the show’s opening credits for the final season. I will miss seeing him on a consistent basis.