I Fell in Love with a Zombie by Sean Kennedy 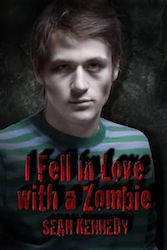 I’ve had an eye on this novella since it came out last summer and I finally took the plunge on it. I Fell in Love with a Zombie by Sean Kennedy is a wonderfully unexpected turn in the zombie genre.

Jay is one of the few who survived a fast-moving flu that ended up turning some of the dead into zombies. These zombies are mean–going from slow moving moaning creatures into fast, agile, machines of death in the span of seconds.

When Jay finally decides to leave his house he has to kill a few zombies of his own, steal cars to keep moving, scavenge for food and run into some other survivors who are less than nice. He almost meets his death when he’s overrun by zombies–until out of nowhere someone takes on the attacking throng. As the dust settles, Jay finds himself facing his ex-boyfriend Dave, who is now a zombie himself.

Dave’s different though. He knows Jay and can sort of say his name. While Dave can’t say much, he’s able to communicate well enough through grunts and gestures. I don’t want to spoil want happens from here except to say that it is at times funny and at times devastatingly sad.

As soon as I was done with the book, I tweeted Sean to ask if there was a sequel because the ending is a big cliffhanger and I desperately wanted more story. Sean tweeted back “I’m still torn between a sequel or whether to leave it with its twilight zone-ish ending.” Fair enough, calling it a Twilight Zone-ish ending is exactly accurate. I still want more, but you can’t fault using a solid story telling technique either.

This was a fun read. I loved Jay going back and forth between survival mode, scared-to-death mode and a hopeful mode.  It all came across beautifully. After getting into The Walking Dead on AMC last fall, this story fit very well into my current enjoyment of zombie tales.