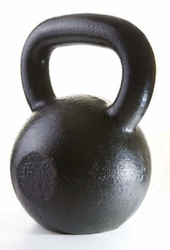 Coming into the new year, Will was researching some new work out routines. Since I’d hit a plateau, I was interested to see what he would pick to open 2011 with.

Last year was an odd year for my workout regime. I spent most of the spring and summer training on my bike to have the stamina to do Braking the Cycle. That had me doing a lot of morning rides and virtually no weight training. After the ride, I got back into weights, but wasn’t very enthused about it.

For his 2011 workouts and food plan, Will decided to go with the Four Hour Body (book | website) regime. The title right off had me. The idea that I could get results with just four hours of gym time rocked and fit nicely with my time management plans for the year.

The food side of it sounded difficult. I tried to eat healthy already, but it was easy to go off the rails by ordering food for dinner or  snacking on the occassional things that would turn up in the office or at the nearby food trucks (the office has both Treats Truck and Wafels & Dinges in the area once or twice a week). The basics of the food plan are you stay away from anything that’s white or was once white (so no bread, no rice, no grains), but eat lots of protein (20g to 30g a meal) and super good carbs (beans and vegetables). And you bascially eat a lot. I started the food plan on January 3 and it hasn’t been perfect. I’ve cheated more than the one cheat day a week. But I’m getting better with it. Luckily Will is quite the cook, so the meals are quite tasty… but I still have to fight the desire for a turkey club and potatoe salad from Gate House or a Domnio’s pizza during the week… not to mention the food truck problem.

So to get back to the headline. Kettlebells. These are an integral part to the new work out regime and something I’d never worked with before. The work out plan has you at the gym a couple days a week doing two exercises each time. One day is back and shoulders. The second day is chest and kettlebell. With back, shoulders and chest you do a 5/5 rep (raise the weight for five seconds and then lower the weight for five seconds). You use enough weight so on the seventh rep you hit failure. It’s got to be true fail too… not just your mind saying “that’s enough” or “that’s seven and you’re done.” You go until you cannot possible move the weight anymore. If you go past seven, you adjust the weight up next time.

The kettlebell is a different animal. This seems to work out everything all at once. You do 50 of these, preferably all in one set. I can’t do all in one set yet. The first time I did it I broke it into three sets with a 25lb weight. Today I used a 30lb and did them in two sets. You feel like you’re going to barf at the end of it. I did better today in part because I’m getting used to the movement, which is sort of difficult to describe… there’s a squat, a shoulder raise, tightening of the core… there’s a lot going on there. My body vibrates for at least an hour after I’m done too. (The plan doesn’t include cardio, but I spin a couple days a week to try to keep my riding in shape.)

I’m enjoying this so far. The weight training is actually kind of fun, even though it pushes the body so hard. Will and I do the weight training together too, which is great for motivation. The food plan is doable and I will conquer the cravings the longer I keep going.

The workout will also be excellent through the spring and summer when I get back on the bike to start training for Braking the Cycle. I can do long rides the mornings I don’t have the workouts and when I do have workouts I can still get a decent ride in.

The goal this year is two fold: I want to be leaner when I ride in September. Plus, it would be ideal to lose the gut I’ve carried for the past couple years. Even though I’m in pretty decent shape overall, the gut is certainly a health risk.

So far, after 2 1/2 weeks on the food plan and 1 1/2 weeks of workouts, I’ve dropped six pounds. Hopefully I can keep that pace up so when I start riding routinely again (I expect that will be March), I’ll feel the difference on the bike.

I’m sure I’ll write more on this as the weeks progress.