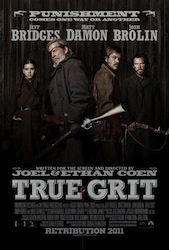 It was nice to see Jeff Bridges redeem himself after the mess that was Tron Legacy. In True Grit he reminds us why he won an Oscar earlier this year (for this role in Crazy Heart). In fact the entire film has Oscar written all over it for not only Bridges performance, but Matt Damon as well and most especially Hailee Steinfeld in her first film role.

Steinfeld is most impressive as the head strong girl who hires a U.S. Marshall to find her father’s killer. Not content to just send the Marshall off to find the killer, she accompanies him into Cherokee territory as she intends to make sure the man is brought to justice. Steinfeld holds her own with each of her more experienced co-stars and makes it look effortless dealing with the rough terrain, riding a horse and the various other things she had to do (I’m sure there were stunt people in place for her occasionally, but it looks like she was in a few uncomfortable positions as well).

The Coen Brothers did a great job adapting Charles Portis’ 1968 novel, which had been made into a movie starring John Wayne in 1969. This True Grit sticks much more to the book’s plot than Wayne’s version did. In the Coen Brothers hands you get the darker humor and the violence that was in the book. They also did right by keeping the story in the young girl’s point of view.

It’s been a great weekend for drama–bonkers ballerina followed by cowboy adventures. Glad to see so many strong movies out at the end of the year after a not so good summer.