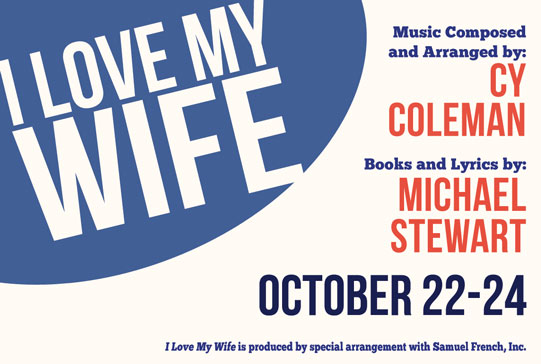 This afternoon we attended a performance of the 1977 musical I Love My Wife, which played this weekend as part of the York Theatre Company’s Musicals in Mufti series (musicals presented in a concert setting with minimal staging and actors with scripts–similar to what City Center does with its “Encores” series). With music by Cy Coleman (a Tony winner for The Will Rodgers Follies, City of Angles and this show) and book and lyrics by Michael Stewart (a Tony winner for Hello, Dolly! and Bye, Bye Birdie), I Love My Wife was a hit of the 1977 season and played for two years. It’s original cast included James Naughton and Joanna Gleason (in her Broadway debut).

We were attracted to this show because Heidi Blickenstaff (a favorite since [title of show]) was in the cast. The show ultimately had even more going for it. It’s a delightful musical comedy that has aged pretty well after more than 30 years. While the idea of swinging was new in the 70s and this show might have even been considered risqué then; now you can imagine this as something couples might discuss as they work on their marriages today.

The show is very funny as each couple navigates their concerns about spending the night in the same bed and spouse swapping. There are some wonderful songs here, including “Someone Wonderful I Missed,” “Lovers on Christmas Eve” and the finale “I Love My Wife.” Blickenstaff was, of course, wonderful with her excellent voice and comedic timing. The other players were also exceptional. I particularly liked Josh Grisetti as Alvin who approached his role with a mix of excitement for something new while balancing the feelings he truly had for his wife and their marriage.

And here’s a little bit of the original show. From the June 1977 Tony Awards telecast here is Lenny Baker (who won a Tony for his role), Joanna Gleason, Ilene Graff and James Naughton performing “Married Couple Seeks Married Couple” (which is from the end of Act II) followed by the onstage band of John Miller, Ken Bichel, Joseph Saulter and Michael Mark with the Act II opening number “Hey There, Good Times.”