This is not easy.

Not easy at all.

It was said during dinner last night, by Eric, the guy who is the event director, that the ride isn’t meant to be easy. The hills are in there for a reason–small and big. He said to think about it like this: the hills represent the issues that people with HIV/AIDS face all the time. They can be living well (the flat parts of the course) and then their T-cell count can drop, they can get pneumonia, they can get cancer… the list of challenges (or hills) is lengthy as is how difficult they are to over come.

Hearing that on day 1, ahead of the hills I knew were coming on day 2 put everything into a different perspective. The hills, no matter how challenging they are, aren’t anything like the challenge faced by a person living with HIV/AIDS. For me, hills have four outcomes: bike to the top, bike part way and walk the rest, walk it, wait for a sweeper vehicle to take me away. None of it is life threatening. I may hate the hills, but in a few minutes each one is in the past. For those with HIV/AIDS that is not the case.

I had a difficult day. There’s no other way to put it. I was mentally out of sorts this morning contemplating the first 40 miles, which were widely (and accurately reported) to be hellish. Not to mention the fact that my body was sore from yesterday. However, I hit the course at 6:45 and peddled my way through some amazing scenery. It was gorgeous. I got to Oasis 1 okay, put the peddle to Oasis 2 went through the hilliest terrain I’ve every dealt with. The 17 miles also included the steep climb up Mount Eric (named because Eric maps out the whole route and puts that hill there himself). I was oh so slow through this area, well before I got to Mount Eric I suspected I was going to be swept because of how slow I was going. I was giving all I had, but it wasn’t fast enough to keep the sweepers away. Sure enough, I as working on Mount Eric (a little bit on the bike and a little on foot), I got swept because the route was closing behind me.

I got swept a couple hours later too. After getting moved on from Mount Eric, I rode from Oasis 2 to 3, a long and hilly 9 miles and did it too slow. As I arrived, the Oasis was closing and I couldn’t ride on because I needed a moment to recharge. Off to the lunch Oasis I went in a bus.

In all, I got swept through about 15 miles today so instead of 103 miles (the length of today’s course) I only rode about 88 (the same amount as yesterday).

There were a lot of people lifting me up today through the craziness:

We’re 83 miles away from NYC and are due into The Center at 13th Street and 7th Ave at 5 tomorrow afternoon.

To close things out, here’s a look at my get up for today. It was red dress day (the idea being that all the red on the roads would look like one long AIDS ribbon). I didn’t have a dress, but I did have a hockey jersey. Here’s Richard and I at Oasis 1 this morning showing off our red (more photos have been uploaded tonight in the Braking the Cycle set on Flickr). 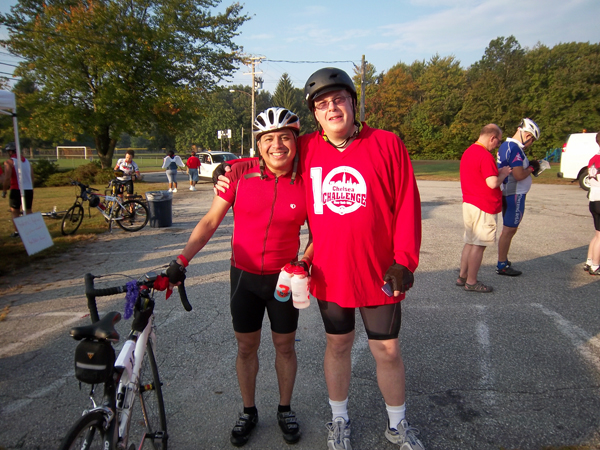