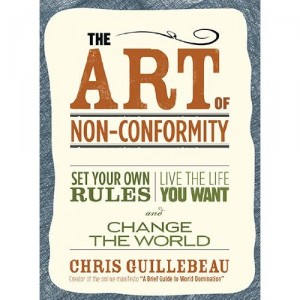 Columbus Circle is not a place either one of us likes to go. The subway station is a jumbled maze and usually way overcrowded. Beyond the subway, the area in general is a crowd magnet. In general the only thing that gets us there is if we’re seeing something at the Jazz at Lincoln Center venue that’s part of the Time Warner Center. Last night, however, I did make the trek to see Chris Guillebeau launch his book tour for The Art of Non-Conformity: Set Your Own Rules, Live the Life You Want, and Change the World at the flagship Borders store. 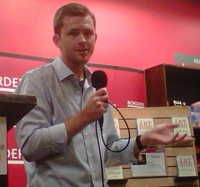 Will is the one who discovered Chris a couple months ago via his Art of Non-Conformity blog. Since then we’ve both taken his ideas to heart as a way to help craft our lives (you can read more about this with Will’s blog post and my post). We’ve both been looking forward to the book to read more of Chris’ wisdom and I’m glad I got to hear him speak last night. One of the things he talked about was how he’s worked to hone is message into an agenda that could be easily passed on. It’s four points and they make total sense.

It was great to hear Chris lay all this out, as well as to hear what the people in the crowd had to say too as they are all figuring out how they are going to live as a non-conformist. I met Chris briefly afterwards too to get a copy of the book signed. I don’t think I’ve ever been so dumbfounded in meeting an author before. I usually manage to say something besides “great to meet you,” but with Chris the words just weren’t flowing out last night. Was I too busy thinking over what I’d heard? Was I a little bit in awe of the guy who I find pretty inspirational right now? Was my brain already headed to sleep since it was pushing 9:00?

Oh well, I’m still glad I was there and that I’ve got the book. The big question now is who is reading it first–me or Will?

The Unconventional Book Tour is just starting out and there are 62 more stops to go. Chris is making at least one stop in every state and Canadian province. Check out the schedule and if he’s in your neighborhood, go see him.