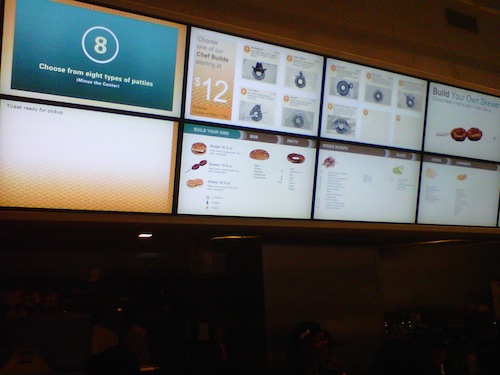 I had the opportunity today to try out the new midtown burger place called 4food. This restaurant has intrigued me for a few months now. I learned about it from a June 16 Wall Street Journal article–“Restaurant Chain Gets Social.”

First of all, with the location at 40th & Madison, this burger joint was just three blocks from the office. That’s significant because after almost three years of working at 38th between 5th & 6th I haven’t found a place with a truly good burger (I think I got spoiled working on the Upper West Side where Big Nicks was just 7 blocks away).

Second, the burgers sounded wonderfully different. Check out this info from the WSJ article: “The burgers have holes in the middle, which can be filled with one of 100 rotating garnishes, from macaroni and cheese to sushi rolls. The hole portions of the burgers are also served on skewers for those seeking a carbohydrate-free dining experience.” How can that not be good?!?

Third, this was going to be high tech. Social networks were going to be in heavy use–Twitter, Foursquare, YouTube and so on. Ordering is done in the store on iPads. How cool is that? You can custom build your own burger, hype it to the world and every time some one orders it you can get a little store credit. 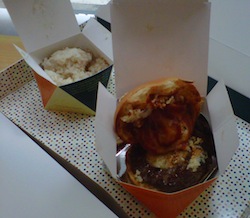 After some delays, 4food has been in preview mode the past couple weeks. I’ve been following on Twitter since the WSJ piece and got friended by the manager on Facebook. I was psyched when he invited me over for a preview lunch. The menu is huge (that’s the menu board pictured up top) with so many choice of what to put in and on your burger–there’s even eight choices of burger patty. Given my love of mac & cheese, it shouldn’t be a surprise I went for the Mac Daddy–mac & cheese in the burger’s hole, pancetta on the burger, a delicious smokey bbq sauce. I tried one of the rice side dishes, choosing a coconut rice, and washed it down with a white peach iced tea (no soda here and I was surprisingly okay with that). That’s lunch over on the right… not the best picture, but a food photographer I’m not. 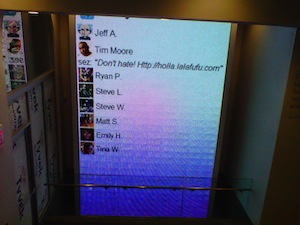 It’s going to be fun to dig into the oodles of filling and topping options for the burgers. I’m told that next week the website will have the full menu on it. I’m also looking forward to ordering on the iPad, which I did not get to do while I was in there today.

I did get to see myself on the big media board though. That’s my foursquare check-in displaying at the top in the picture on the left. I might have ended up there again later when I tweeted about the meal I had (since I tweeted while walking back to the office I didn’t get to see the result).

4food officially opens September 7 (that’s the Tuesday after Labor Day) and will continue to have some preview time between now and then…follow them on Twitter to catch the messages about that. If you’re in the midtown area, I suggest checking them out because at $12-$13 for a meal it’s a good value for midtown and, more importantly, it’s a good burger! There’s going to be breakfast available too, which I look forward to investigating. Basically, it’s going to be pretty dangerous to have such good food–burgers no less–so close to the office.