At one point in the four hours of So You Think You Can Dance finale, Nigel said that for the first time ever he really didn’t mind which of the three won because they were all deserving. I agree 100%. I felt that way when the top three were announced  and, having finally caught up on the finale, I still feel that way. Kent, Robert and Lauren each had stand out performances and each got saddled with some weak choreography a long the way. Robert and Mark’s jazz number, while a lot of fun, wasn’t exactly finale worthy. The same is true for the number Mandy put together for Lauren and Kent–cute, but not quite up to finale level. 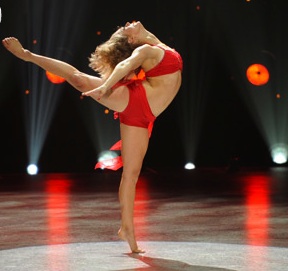 If I’d been voting, I’m really not sure which way I would’ve gone. Robert had my favorite routines of the night–his “Cool” with Kathryn was outstanding, the Malevos Fight with Kent was quite spectacular and the contemporary routine he did with Lauren and a pillow was beautiful. Lauren had a great night too, not only with Robert and the pillow, but also with a powerful hip hop routine with Twitch. Kent had strong Bollywood and his fight with Robert. I think what might have pushed me into the Lauren camp was her solo, which was the best solo of the night. She put in a couple of jaw dropping moves and left everything on the floor. The other two, meanwhile gave strong performances but they didn’t offer really anything new. 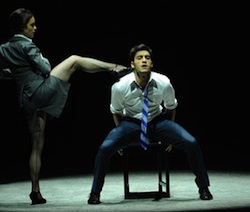 As for the results show itself, what a hot number Christopher Scott from The LXD put together for the group to do. It was very cool that Alex got to be involved too, it was a great extra touch. Russell and Lil C performing together was a great addition too. I’m glad Russell is getting to go on tour as it will be cool to see him do his thing. The Manzari Brothers were awesome. Have they every auditioned? They’d be great tappers to have on the show. (And as a side note on tap, I think the finale was the first time SYTYCD has properly mic’d the tappers…they sounded great.) Charlie Bruce, the winner of the UK SYTYCD did a gorgeous contemporary number with US All Star Neil. Ellen and Twitch stole the show though as she re-created the Hip Hop number Alex & Twitch did the week before Alex got injured. She did a solid job for a non-trained dancer. Well done!

Overall, season 7 was great. It would’ve been better if Alex had been able to finish out the competition. Hopefully his recovery will be successful and he’ll choose to return in a future season. Kudos to Napoleon & Tabitha who really excelled with the choreography this year. I’ve been a fan since “Bleeding Love,” which is just about the time I started watching the show. This season they excelled with every number they put on the stage. I hope Mia stays with the judging panel too, while I miss her choreography I found her insight compelling and honest. It would be great to have a fourth rotating judge though.

SYTYCD is completely done for me. Will and I have tickets to the tour, which comes into Radio City Music Hall on October 7. It’s going to be awesome to see these dancers live!