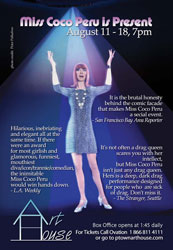 It was a treat to see Miss Coco Peru live. I first saw this drag queen in the movie Trick and again on a couple of specials on Logo. Tonight she riffed on a few things on her mind: her desire to be a drag queen Jesus, the visit she had from a space alien, how she has issues dealing with people in the real world and her trips through therapy and self-help over the years.

On her annoyance with how stupid people can be she related a story about this woman in an airline baggage claim line. The woman remarked to her husband about how she’d just seen a bag come down the chute that was just like the bag she had last year and how if this was last year that would be her bag. I rolled my eyes as Coco told that story and Coco told how she had to refrain from turning to the woman and saying just how stupid that was.

Of her desire to be a drag queen savior, she didn’t thing she could do it. She imagines if Jesus himself were to confront the people who carry the “god hates fags” signs, he would strive to find the best in those people and make them see how wrong their hate is. She, meanwhile, would want to just beat them with the signs. At least she recognizes that is not very savior-like.

One way she does think the world could be made better is if everyone just shimmied. You see, she saw young girl who lives next door to her out on the front porch just shimmying away. The girl said she just couldn’t stop because it made her so happy. Coco tried it and it made her happy too. She got the whole audience in on it as she sang a modified version of “Dancing in the Streets.” I was pretty dang happy too after the shimmying was done. Maybe I should incorporate that into my morning routine so I can start the day with a shimmy!