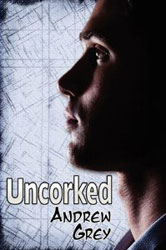 Uncorked is the third book I’ve read that revolve around characters who live in Milwaukee. In this book, the action jumps forward a few years from the end of Bottled Up. Sean and Sam are still together and their Sean’s adopted son Bobby is preparing to graduate college with a degree in art. We also learn through flashbacks that Sean and Sam also took in Kenny, the son of Sam’s partner who was gunned down in the line of duty. Kenny is also preparing to graduate college in criminal justice.

The main action takes place as Bobby and Kenny come home for spring break with plans to help Sean and Sam out at the wine store so their dads can get away. Bobby and Kenny are estranged and neither is looking forward to spending time together. Bobby has crushed on Kenny for a while and he can’t get passed the fact that Kenny doesn’t have feelings for him. But what is Kenny really thinking?

There’s also a mystery going on. Wine is missing from the store. Every few days a case or some bottles go missing. The boys, despite their issues with each other, are determined to discover who is stealing from their dads.

The outcome of the mystery was an interesting surprise and not something I saw coming, which I liked. Watching Kenny and Bobby work out their issues made this a great read. Each of them had their heart on the line and it was tough at times watching them dance around each others feelings because you know they just need to sit down and have a good talk. Their journey to the end of the book though was quite satisfying.

A couple of nice minor plots in this book included Bobby working his way through be blocked on his senior art project. The work he ended up producing sounded incredible from the descriptions of it. Bobby also ends up talking to his real father again during a touching sequence about midway through the story.

I hope Andrew revisits these characters again, whether they get their own story again or if they simply turn up as supporting players in a novel that focuses on someone else in Milwaukee.