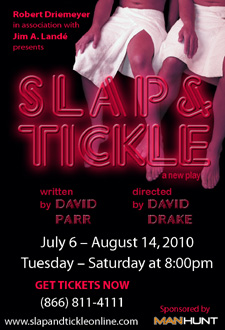 Slap and tickle is something that happens somewhere between flirting and foreplay. In this case Slap & Tickle is also the name of a new play by David Parr that’s playing at The Provincetown Playhouse. This caught our eye because it’s directed by David Drake, a writer and actor we’ve seen in The Night Larry Kramer Kissed Me. We didn’t know much about the play before we booked the tickets except that Drake directed it and that it was set in a bath house with a wide array of gay characters. The show was quite powerful as fifteen men, played by six actors, detailed their experiences being gay both inside and outside the bath house.

There were coming out stories, first crushes, gay bashings, relationships discovered and relationship dissolved, first-time sex and older characters described how hooking up had changed with the internet. Some of the stories were funny, such as the tale of high school lab partners and one who tries to make a pass at the other only to receive a note back with five word: “I am not a fag.” Years later they find each other again in a gay bar and make the connection they couldn’t before. The two men who’d met at the bath house and were five years into a relationship was amusing, cute and touching all at the same time.

The story of the young man who ran into someone he knew from the gym was sad, and probably all too true. The young man ended up being taken advantage of in the bathroom and became the victim of unsafe sex. The older gentleman, who visited the bath house more for company rather than sex, was incredible. He had the history of the bath houses, from when they weren’t legal to when they were and how the rules had changed over the decades.

Four of the six actors each took on three or four roles each and did a great job of taking on the different personas. Since everyone was dressed in a towel, they had to relay on different body language, voices, mannerisms and in some cases how they wore the towel, to convey who they were playing. Each character had clear delineations and at times I felt like there were more than six actors in the show.

Parr and Drake crafted an excellent stage experience as the stories weaved together, some paying off rather quickly while others were strung out through the 90 minutes. I can easily see this running off- or off-off-Broadway in NYC because it offers a stunning portray of gay lives past and present.