The Cross of Sins (Special Edition) by Geoffrey Knight 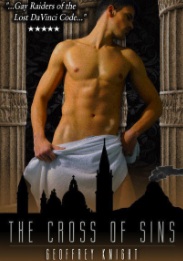 It was back in Fall 2008 that I read Geoffrey Knight’s The Cross of Sins and I loved it. It was full of action, adventure, mystery and a pack of hot guys who went around the world Indiana Jones style. In 2009 the sequel, The Riddle of the Sands came out and I was captured by the Fathom’s Five men all over again. Now Knight has released a special edition of The Cross of the Sins and while I haven’t re-read the book yet (there are some 70 pages of bonus material), I have read the new short story “The Amazing Adventures of Elsa Strauss: The Dame of Notre Dame” and it’s a wonderful look at a character who plays an important supporting role in the novels.

In the short, Elsa is called on to save the Professor and team who’ve gotten into trouble while trying to recover a map. They’re stuck in a dungeon and before communications are cut off, the professor tells Elsa she must go to the Notre Dame’s archives to retrieve the plans of the place they’re being held and to use whatever tunnels she finds to rescue them without being seen. Of course, it’s not a spoiler to say she succeeds given that everyone is alive and well in The Riddle of the Sands but it is fabulous reading what Elsa has to go through to pull this off.

I hope Elsa gets some additional spotlight opportunities in the future because this was a lot of fun.

Meanwhile, I’m excited to go revisit The Cross of Sins soon and see what’s been added in addition to Elsa’s adventure.