Something for Nothing by Connie Bailey 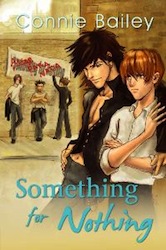 Something for Nothing by Connie Bailey was an unexpected find from Dreamspinner Press. I don’t often think of this publisher as taking on young adult genre material, but this book comes very close. The only thing separating it from true YA for me is the sex because it’s more than a school or public library would be likely to put on its shelves.

The story centers on Alvaro Torres, a high school senior who has been labeled as a troublemaker but in reality he’s trying to make something of himself while taking care of his mother who had a breakdown after Alvaro’s father bailed on them. Alvaro has tight friends in Leo and Kiki and he takes newcomer Cande under his wing when Cande’s first days at school are anything but easygoing.

As Alvaro and Cande get to know each other more they start to very slowly and cautiously fall in love. It takes these two a while to get past their baggage–and Cande’s got even more than Alvaro does. The boys, along with a younger tag-along sidekick Eligio, are rehearsing for a major talent competition hoping that it might be a way out of the dead-end jobs their teachers envision for them. The back and forth between the love story, the core friendships and the competition is well balanced and there are a few surprising and satisfying twists to the plot as well.

The lone issue I have with Something for Nothing is that Alvaro and Cande never discuss their relationship with Eligio. Alvaro, Cande, Leo and Kiki all say that Eligio needs to be talked to because he has some homophobic tendencies that need to be corrected. Unfortunately, this never plays out in the book. There are a couple hints in the epilogue that the discussion probably happened in the passing years but I’d have rather seen this play itself out, especially since such a point was made that Eligio needed to be talked to.

Up next: Returning to Uncorked by Andrew Grey.